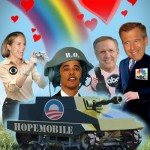 A recent analysis by Roger Simon of PJTV Media maintains that Obama is showing signs of mental illness. A wide variety of commentators have observed that Obama displays severe narcissism. Obama is conceited, and he is demonstrating a serious disassociation from reality.

A recent case in point was Obama’s bizarre and meandering 17-minute, 2,500-word answer to the simple question about how he could justify raising taxes for ObamaCare during a recession when citizens are already overtaxed. Obama’s wildly inappropriate answer left the audience stunned and led commentator Charles Krauthammer to mockingly say, “I don’t know why you are so surprised. It’s only nine times the length of the Gettysburg address, and after all Lincoln was answering an easier question, the higher purpose of the union and the soldiers who fell in battle.”

This lapse of delusion occurred in front of a friendly audience. Overall, Barack Obama seems to be slipping into a slightly more delusional state these days.

On Monday, following his embarrassing answer on Saturday, Obama stopped by the Washington Nationals home opener to loft an effeminate toss toward home plate constituting the ceremonial first pitch. After this display, Obama was mucking it up in the press booth talking about his love of the Chicago White Sox. The announcers asked Obama which players he supported growing up a White Sox fan. After hemming and hawing for about 30 seconds, Obama responded that he grew up in Hawaii and was actually an A’s fan. Again, he avoided mentioning any players by name. Obama seems to believe that he can say whatever he wants, and not reap the consequences or be forced to defend his empty assertions. Obama behaves in a manner so disconnected from reality that he is shocked when someone has the audacity to question him. Obama acts like his word is infallible.

In March of last year Obama was on “60 Minutes” with Steve Kroft. Throughout the interview as Kroft questioned about the economic downturn and people losing their life savings, Obama just kept laughing. A one point CBS’s Kroft stopped him and asked, “Are you punch drunk?” How will the American people react to seeing their president laugh off their predicament? Obama’s inappropriate laughter clearly demonstrated he has lost touch with the pain that people are feeling.

Obama portrays himself as the larger-than-life figure towering above the political fray. At the summit when Obama was pushing his health care package through Congress, he attempted to act as if he were the chief arbiter of truth. With petty insults, he slapped down what the Republicans proposed and audaciously claimed his was a “bipartisan bill.” Obama distorts the truth with such frequency that one must start to question if Obama even realizes he is lying or is so disassociated from the truth that he believes what he says.

A further example of Obama’s delusions of grandeur occurred when he gave himself a “good solid B plus.” Believing that his presidency was an above average success when America is hurting is absurd. Obama went so far as to claim that he would give himself an “A” once health care was passed. Obama is not living in the same reality as the rest of us.

As Charles Krauthammer wrote, “Not that Obama considers himself divine. (He sees himself as merely messianic, or, at worst, apostolic.) But he does position himself as hovering above mere mortals, mere country, to gaze benignly upon the darkling plain beneath him where ignorant armies clash by night, blind to the common humanity that only he can see.”

Obama sees himself as the greatest man to be president in all time. He truly believes it when he said “we are the ones we have been waiting for,” and “this is the moment when the rise of the oceans began to slow and the planet began to heal.” He believes that he can do anything he pleases and the people will love him for it. Obama plans to radically transform this country and go down in history as, in his mind, the greatest ever. Obama is clearly disconnected from reality.

Obama is, according to Newt Gingrich, “potentially the most dangerous (president), because he so completely misunderstands reality.” Gingrich was referring to Obama’s inept and weak stance on missile defense amongst other things. Even Mahmoud Ahmadinejad has said that Obama is an amateur; so much for wowing the world. Obama lives in an alternate universe where he treats our friends poorly and expects our enemies to change and become our friends. Here’s hoping that the voters help to connect this president back to reality in November.

PHOENIX — Favoring the constitutional right to bear arms over others' concerns about gun safety, Gov. Jan Brewer on Friday...