[Differs slightly from the published version]

The impact of National Socialism in the Middle East used to appear brief and superficial. Unlike with Communism, whose local parties and outside influence through the Soviet bloc lasted over many decades, the Nazis’ moment lasted about six years, 1939-45, and they had little regional presence beyond Rommel’s armies in North Africa and a fleeting pro-Nazi regime in Iraq. 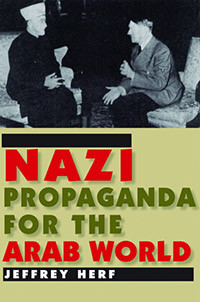 But two powerful, important books have set the record straight. Djihad und Judenhass (2002) by Matthias Küntzel, translated into English in 2007 as Jihad and Jew-Hatred: Islamism, Nazism and the Roots of 9/11, shows the continuing influence of Nazi ideas on Islamists. Nazi Propaganda for the Arab World by Jeffrey Herf focuses on an earlier time, the 1930s-40s, and the major effort by Hitler and his minions to transmit their ideas to the Middle East. After reading Küntzel and Herf, I realize that my education about the modern Middle East was lacking a vital ingredient, the Nazi one.

A specialist in modern German history at the University of Maryland, Herf brings a new corpus of information to light: summary accounts of Nazi shortwave radio broadcasts in the Arabic language that were generated over three years by the U.S. embassy in Cairo. This cache reveals fully, for the first time, what Berlin told the Arabs (and to a lesser extent, the Iranians). As page after page of Nazi Propaganda for the Arab World establishes in mind-numbing but necessary detail, the Germans above all pursued two themes: stopping Zionism and promoting Islamism. Each deserves close consideration.

Nazi propaganda in Arabic portrayed World War II, history’s largest and most destructive war, as focused primarily on the sliver of land between the Mediterranean Sea and the Jordan River. This interpretation both flattered Arabs and extended Hitler’s grand theory that Jews wanted to take over the Arab countries and eventually the whole world, that the Allied powers were but pawns in this Zionist conspiracy, and that Germany was leading the resistance to them.

Palestine was the key, according to these broadcasts. If Zionists took it over, they would “control the three continents: Europe, Asia, and Africa. Thus they will be able to rule the whole world and spread Jewish capitalism.” Such an eventuality would lead to Arabs oppressed and Islam defunct. “Should Bolshevism and Democracy be victorious,” announced Nazi radio, “the Arabs will be dominated forever and all traces of Islam will be wiped out.” To avoid this fate, Arabs had to join with the Axis.

As the war progressed, Berlin’s incitement became ever more furious. “You must kill the Jews before they open fire on you. Kill the Jews” went a July 1942 broadcast. Herf notes the bitter irony: “At this moment of complete Jewish powerlessness, the Arabic broadcasts from Berlin skillfully adapted the general Nazi propaganda line about Jewish domination of the anti-Hitler coalition to a radical Arab and Islamic view.”

At the same time, the Nazi regime developed an approach to Muslims that largely ignored the Protocols of the Elders of Zion, Mein Kampf, and other European sources in favor of selected passages from the Koran.

Hitler’s propagandists assured Muslims, first, that Axis countries “respect the Koran, sanctify the mosques, and glorify the prophet of Islam.” It cited the respectful work of German Orientalists as an important sign of goodwill. Second, it argued for what Heinrich Himmler called the “shared goals and shared ideals” of Islam and National Socialism. These included monotheism, piety, obedience, discipline, self-sacrifice, courage, honor, generosity, community, unity, anti-capitalism, and a celebration of labor and warfare.

In addition, Muslims were told that they and the Nazis were purportedly both fighting a “great struggle for freedom” against the British, the most important colonial power in the Middle East. The regime drew a parallel between Muhammad and Hitler and presented the umma as roughly analogous to its own notion of a totalitarian Volksgemeinschaft (“people’s community”).

Nazis portrayed Islam as an ally and, accordingly, called for its revival while urging Muslims to act piously and emulate Muhammad. Radio Berlin in Arabic went so far as to declare “Allahu akbar! Glory to the Arabs, Glory to Islam.” The Germans held that Muslims who were not righteous enough (i.e., not following the Nazi ideological model) were causing the umma to languish: “Muslims, you are now backward because you have not shown God the proper piety and do not fear him.” And not just backward, but also “invaded by merciless tyrants.” Specifically for Shi’ites, the Nazis hinted at Hitler being the awaited Twelfth Imam or the Muslim eschatological figure of Jesus, who will fight the anti-Christ (namely, the Jews) and bring on the end of days.

The Nazis noted the parallel between sayings from the Koran (Sura 5:82, “You will meet no greater enemy of the believers than the Jews”) and the words of Hitler (“By resisting the Jews everywhere, I am fighting for the Lord’s work”) and turned the Koran into an anti-Semitic tract whose primary purpose was to call for eternal hatred of Jews. They even falsely claimed that Muhammad ordered Muslims to fight the Jews “until they are extinct.”

In the Nazi telling, Jewish-Muslim enmity dated back to the 7th century. “Since the days of Mohamed, the Jews have been hostile to Islam” went one broadcast. “Every Moslem knows that Jewish animosity to the Arabs dates back to the dawn of Islam” declared another. “Enmity has always existed between Arab and Jew since ancient times” insisted a third. The Nazis built on this premise to establish the basis for a Final Solution in the Middle East, instructing Arabs to “make every effort possible so that not a single Jew … remains in Arab countries.”

Herf emphasizes the remarkable symbiosis of German and Middle Eastern elements: “As a result of their shared passions and interests, they produced texts and broadcasts that each group could not have produced on its own.” Specifically, Arabs learned “the finer points of anti-Semitic conspiracy thinking,” while Nazis learned the value of focusing on Palestine. He describes the coming together of Nazi and Islamic themes in Berlin as “one of the most important cultural exchanges of the twentieth century.”

Having detailed Nazi propaganda in Arabic, Herf then traces its impact. He begins by documenting the great energy and expense devoted to these messages—the quality of the personnel devoted to it, their high-level Nazi patronage, the thousands of hours of radio transmissions, and the millions of pamphlets.

He then rounds up assessments of the Axis impact, all pointing to its success. Allied estimates from 1942, for example, found that “the people were saturated with Axis talk,” that “upwards of three-fourths of the Moslem world are in favor of the Axis” and that “90% of the Egyptians, including their government, believe that the Jews are mainly responsible for shortages and high prices of essentials.” A report from 1944 found that “practically all Arabs who have radios … listen to Berlin.”

Allied reluctance to contradict Nazi propaganda also points to Axis success. Fearful of alienating Middle Easterners, the Allies stayed humiliatingly silent about the genocide taking place against the Jews; failed to refute allegations about Jews dominating London, Washington, and Moscow; did not dispute the distorted Koranic interpretations; and shied away from endorsing Zionism. Merely to dispute Nazi accusations, the Allies worried, would only confirm Nazi claims about Britain, America, and Russia being stooges of Jewish power. An internal U.S. directive in late 1942 acknowledged that “the subject of Zionist aspirations cannot be mentioned, inasmuch as … [this] would jeopardize our strategy in the Eastern Mediterranean.”

Thus, when two leading U.S. senators, Robert Taft of Ohio and Robert Wagner of New York, proposed a resolution in 1944 endorsing a Jewish national home in Palestine, Berlin radio in Arabic called this an attempt “to erase Islamic civilization” and “to eradicate the Koran.” Panicked, the entire weight of the Executive Branch came down on the senators, who felt compelled to withdraw their resolution. Clearly, Nazi offerings resonated deeply in the Middle East.

They continued to do well after the Nazi collapse and the war’s conclusion. The defeat of Nazi General Erwin Rommel’s aggressive push into North Africa meant that Nazi ambitions in the Middle East, in particular the Final Solution to annihilate its million or so Jews, were never implemented. But years of hate from radio and pamphlets and the repetitive, grotesque, ambitious, anti-Semitic, and Islam-based message detailed by Herf had taken root. Not only did the Middle East’s Nazis emerge nearly invulnerable to prosecution, but they also prospered and were feted. An example: in 1946, Hasan al-Banna, founder of the Muslim Brethren, lavished praise on Hitler’s favorite Arab, Haj Amin el-Husseini, calling him “a hero … a miracle of a man.” Banna added for good measure: “Germany and Hitler are gone, but Amin el-Husseini will continue the struggle.” Acknowledging el-Husseini’s exalted status, a British officer in 1948 described him as “the one hero in the Arab world.”

Ideas the Nazis spread in the Middle East have had an enduring twofold legacy. First, as in Europe, they built on existing prejudices against Jews to transform that prejudice into something far more paranoid, aggressive, and murderous. One U.S. intelligence report from 1944 estimated that anti-Jewish materials constituted fully half of German propaganda directed to the Middle East. The Nazis saw virtually all developments in the region through the Jewish prism and exported this obsession.

The fruits of this effort are seen not only in decades of furious Muslim anti-Zionism, personified by Arafat and Ahmadinejad, but also in the persecution of ancient Jewish communities in countries like Egypt and Iraq, which have now shriveled to near-extinction, plus the employment of Nazis such as Johann van Leers and Aloïs Brunner in important government positions. Thus did the Nazi legacy oppress Jewry in the Middle East post-1945.

Second, Islamism took on a Nazi quality. As someone who has criticized the term Islamofascism on the grounds that it gratuitously conflates two distinct phenomena, I have to report that Herf’s evidence now leads me to acknowledge deep fascist influences on Islamism. This includes the Islamist hatred of democracy and liberalism and its contempt for multiple political parties, preference for unity over division, cult of youth and militarism, authoritarian moralism, cultural repression, and illiberal economics.

Beyond specifics, that influence extends to what Herf calls an “ability to introduce a radical message in ways that resonated with, yet deepened and radicalized, already existing sentiments.” Although a scholar of Europe by training, Herf’s detective work in the U.S. archives has opened a new vista on the Arab-Israeli conflict and Islamism, as well as made a landmark contribution more broadly to an understanding of the modern Middle East.

Two Katyusha rockets reportedly fired at Eilat from Egypt's Sinai Peninsula landed in Jordan. One of the rockets fired early...