BRUSSELS – Belgian lawmakers voted overwhelmingly Thursday to ban the wearing of the Islamic burka in public, paving the way for the first clampdown of its kind in Europe. 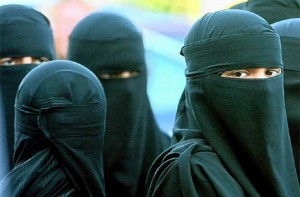 In the lower house of federal parliament, 136 deputies voted to ban nationwide clothes or veils that do not allow the wearer to be fully identified, including the full-face niqab and burka.

There were two abstentions. No one voted against.

The ban will be imposed in streets, public gardens and sports grounds or buildings “meant for public use or to provide services” to the public, according to the text of the bill.

Exceptions could be allowed for certain festivities like carnivals if municipal authorities decide to grant them.

People who ignore the new law could face a fine of 15-25 euros ($21-35 Cdn) and/or a jail sentence of up to seven days, unless they have police permission to wear the garments.

All governing parties and the opposition agreed on the move — most on the basis that people cannot be recognized wearing the clothing.

The upper house of parliament has two weeks to raise any objections to the decision.

“It’s not about introducing any form of discrimination,” Daniel Bacquelaine, head of the liberal MR party in the house told the lawmakers, but for cases when such clothing was “aimed at stopping people from being identified.”

Ahead of the vote, the vice-president of the Muslim Executive of Belgium, Isabelle Praile, warned that it could set a dangerous precedent.

“Today it’s the full-face veil, tomorrow the veil, the day after it will be Sikh turbans and then perhaps it will be mini-skirts,” she said.

“The wearing of a full-face veil is part of the individual freedoms” protected by Belgian, European and international rights laws, she said.

The Catholic bishop — Belgium is traditionally Catholic — in the southern town of Tournai, Guy Harpigny, said: “Does the state really have the right to regulate the symbols of personal beliefs?”

The ban comes amid controversy in the kingdom over the wearing of Muslim religious symbols in public places.

In June last year, a Belgian lawmaker of Turkish origin was sworn in at the Brussels regional parliament wearing an Islamic headscarf in a first for the country.

At the time opponents of the veil distributed flyers at the entry to the assembly building, but they did not disturb proceedings as 26-year-old Mahinur Ozdemir was triumphantly sworn in to applause and camera flashes.

Controversy has also raged elsewhere in Europe over the wearing of Muslim veils and other religious garments in state or public institutions.

President Nicolas Sarkozy has declared the burka not welcome in France, calling it an affront to French values that denigrates women.

A final draft of the legislation outlawing the face-covering veil from all public spaces as well as state institutions is set to be approved by the cabinet on May 19.

Staunchly secular France passed a law in 2004 banning the wearing of headscarves or any other “conspicuous” religious symbols in state schools.

Lawmakers were defiant in the face of claims they could face repraisals.

“The fact of being scared, should that be a reason not to defend our values?” Denis Ducarme from the MR movement told fellow lawmakers Thursday.

Muslim extremists have threatened to kill a Danish cartoonist who caricatured the prophet Mohammed, and more recently warned the creators of U.S. animated television series South Park that they risked the same fate as slain Dutch filmmaker Theo Van Gogh, who was murdered in Amsterdam in 2004.

In Case You Missed It:  Get Ready for the Economic Collapse
Posted in Terrorism and tagged Europe, Islam, Terrorism.

My Peace Plan: An Israeli Victory