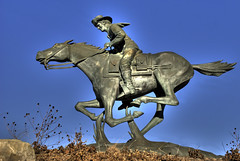 The Pony Express, the system of mail delivery by continuous horse and rider relays between St. Joseph, Missouri, and Sacramento, California, started 150 years ago on Apr 3. The scant 19 months it lasted ranks as one of the most colourful episodes in the history of the American West. Hollywood has immortalized the service and some of its famed riders, who include William (Buffalo Bill) Cody and Pony Bob Haslam. The celebration includes a bigger-than-usual reenactment over the 1995-mile route.

The 10-day route across California, Nevada, Utah, Wyoming, Nebraska, Colorado, Kansas and Missouri cut in half the normal mail delivery time via overland stage. It ended when telegraph lines were strung from Missouri to California. Riders averages 200 miler per day over mountains and across deserts.

Every year the Pony Express Association commemorates the historic mail service with a re-ride along the full route. It plans a bigger-than-usual re-ride for the 150th anniversary, with special anniversary events in each of the eight states along the way. The town of Sidney, Nebraska, will be home to the Pony Express National Monument, a life-sized horse and rider sculpture that will be unveiled on the anniversary. There will also be special events in Washington DC. Apr/09