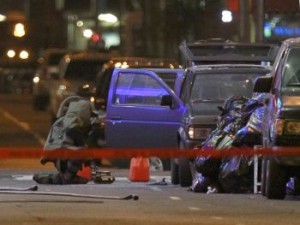 Saturday we hear of yet another terrorism scare in New York city, this time the very populated tourist area of Time Square. The first things that comes to many of our minds, was this another attempt by Islamic radicals? Is Islam behind this latest bombing attempt? The answer is the investigators have not released any information as of yet, although chances are high Islamic extremism is in fact behind the latest attempt on New York City.

Homeland Security Secretary Janet Napolitano said on NBC’s “Meet the Press” that officials are treating the incident as a potential terrorist attack.

Duane Jackson, a 58-year-old handbag vendor from Buchanan, N.Y., said he noticed the car at around 6:30 p.m. and wondered who had left it there.

“That was my first thought: Who sat this car here?” Jackson said Sunday.

Jackson said he looked in the car and saw keys in the ignition with 19 or 20 keys on a ring.

He said he alerted a passing mounted police officer.

“That’s when the smoke started coming out and then we heard the little pop pop pop like firecrackers going out and that’s when everybody scattered and ran back,” he said.

“Now that I saw the propane tanks and the gasoline, what if that would have ignited?” Jackson said. “I’m less than 8 feet away from the car. We dodged a bullet here.

The theater district in London was the target of a Muslim propane bomb attack in 2007. No one was injured when police discovered two Mercedes loaded with nails packed around canisters of propane and gasoline.

Officials said the device found Saturday was crudely constructed, Islamic militants have used propane and compressed gas for years to enhance the force of explosives. Those instances include the 1983 Muslim suicide attack on the U.S. Marines barracks at the Beirut airport that killed 241 U.S. service members, and the 2007 attack on the international airport in Glasgow, Scotland.

In 2007, the U.S. military announced that an al-Qaida front group was using propane to rig car bombs in Iraq.

Times Square has been a frequent target, for Islamic terrorists. Is Islam behind this attack, we will find out in the next few days.

UPDATE:
The U.S.-based SITE intelligence group, which monitors militant websites, said the Pakistani Taliban claims the Times Square attack is revenge for the death of its leader Baitullah Mehsud and the recent killings of the top leaders of al-Qaida in Iraq. Read more:

Why Arizona Drew The Line

Gov. Jan Brewer of Arizona signed a law - SB 1070 - that prohibits the harboring of illegal aliens and...