Analyst: ‘That is exactly what Iranians are working toward’ 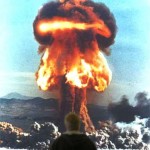 There is renewed alarm about the possibility of an EMP attack – electromagnetic pulse – on the United States because of Iran’s work on a multi-stage Space Launch Vehicle, according to a report from Joseph Farah’s G2 Bulletin.

And experts forecast if such an attack were a success, it effectively could throw the U.S. back into an age of agriculture.

“Within a year of that attack, nine out of 10 Americans would be dead, because we can’t support a population of the present size in urban centers and the like without electricity,” said Frank Gaffney, president of the Center for Security Policy. “And that is exactly what I believe the Iranians are working towards.”

A recent launch of an SLV by Iran has sparked renewed concern of an attack that could send an electromagnetic pulse powerful enough to wipe out computer controls for systems on which society has come to rely, officials say.

As the G2 Bulletin reported last week, Ronald Burgess, director of the U.S. Defense Intelligence Agency, revealed that Iran successfully launched a multi-stage SLV, the Simorgh. The device ultimately could be equipped with a nuclear bomb, which the U.S. intelligence community assesses Iran is developing.

Officials also report Iran has been testing detonation of its nuclear-capable missiles by remote control while still in high-altitude flight. The development makes a potential EMP attack on the U.S. more probable.