“I have a dream, that my four little children will one day live in a nation where they will not be judged by the color of their skin but by the content of their character. I have a dream today!” – Martin Luther King, Jr. 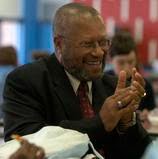 Remember a few years ago that the phrase “driving while black” was used often to excuse being pulled over for whatever traffic violation? Well, looks like now there is a more real racism – “learning while white.” You don’t get a ticket for being white. Instead, you lose your educational opportunity.

An Ann Arbor elementary school principal used a letter home to parents tonight to defend a field trip for black students as part of his school’s efforts to close the achievement gap between white and black students.

Dicken Elementary School Principal Mike Madison wrote the letter to parents following several days of controversy at the school after a field trip last week in which black students got to hear a rocket scientist.

White students not allowed! This isn’t even separate but equal, it is rather separate and unequal by design! And the principle of the elementary school is defending this by pointing out the benefit to the black students that got to go:

“In hindsight, this field trip could have been approached and arranged in a better way,” Madison wrote. “But as I reflect upon the look of excitement, enthusiasm and energy that I saw in these children’s eyes as they stood in the presence of a renowned African American rocket scientist in a very successful position, it gave the kids an opportunity to see this type of achievement is possible for even them.

“It was not a wasted venture for I know one day they might want to aspire to be the first astronaut or scientist standing on the Planet Mars.

Thus begs a question: would the white children have not gotten the same benefit from attending that event? Would Principal Madison not have seen “excitement, enthusiasm and energy” in the white students eyes as well?

“I also think it’s important that you know that I have talked to the children who did not go on the field trip, and I think they have a better understanding of the purpose of the AA Lunch Bunch now, as I hope you do. I’m sorry if any kids were upset by the field trip or my discussion afterwards with them, and I have let them know that.

“The intent of our field trip was not to segregate or exclude students as has been reported, but rather to address the societal issues, roadblocks and challenges that our African American children will face as they pursue a successful academic education here in our community.”

Yet he did exactly what he states his intent was not – he separated students by race and handed out burdens and benefits based on skin pigmentation directly against the equal protection clause in the US Constitution. The intent is irrelevant – the result is what matters here. Just so you get a sense of how Madison is running that elementary school, this snippet from the article is telling:

A handful of parents have complained to district administrators about the trip, the group and Madison. More than a half-dozen parents contacted AnnArbor.com to raise the complaints, but none would agree to talk on the record, citing concerns of reprisals to their children by Madison.

Apparently, Madison intimidated the white students who felt, and in fact were, slighted because of the color of their skin:

District spokeswoman Liz Margolis said after the trip was over, those who went returned to their fifth-grade class and were greeted by boos by those who didn’t go on the trip. Margolis said Madison, who is black, heard the boos, and went to talk to the class. She said he and the class had a “discussion” about race issues.

“He wasn’t yelling at them. He was very passionate about it,” Margolis said.

Parents have complained he was yelling at the class and belittled a Muslim girl who said she also had experienced racism and discrimination.

From the account in the article, other administrators also defend the program, and there is no hint of the program doing anything other than continuing to pick winners and losers by the color of their skin. This isn’t the first time Ann Arbor schools has popped up on my radar either. Last year (March 2009) I had this: “Disproportionate Representation” in Special Ed? So same crap, different day. Affirmative action is outright racial discrimination on its face, which is ironic considering the original affirmative action order by President John F Kennedy read, in part:

WHEREAS discrimination because of race, creed, color, or national origin is
contrary to the Constitutional principles and policies of the United States; and 13 CFR 1960 Supp. …

SEC. 202. All executive departments and agencies are directed to initiate forthwith studies of current government employment practices within their responsibility. The studies shall be in such form as the Committee may prescribe and shall include statistics on current employment patterns, a review of current procedures, and the recommendation of positive measures for the elimination of any discrimination, direct or indirect, which now exists. …

In exactness, liberals have turned affirmative action on its head. The affirmative action order was to ban any discrimination and have a color-blind society. The liberals abhor such a value and prefer to divide people by race, sex, ethnicity, religion, sexual orientation, etc. Identity politics at its best. Or worst as it were.

In Case You Missed It:  People Are Horrified After Madonna Shares Creepy TikTok (VIDEO)
Posted in Freedoms and tagged Freedom, Racism.

The BBC prefers to shoot the messenger rather than address the message. Having sent the BBC our latest in-depth analysis...