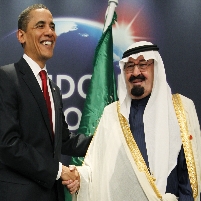 The suits were filed by thousands family members and others affected by the Sept. 11 attacks. In court papers, they provided evidence that members of the Saudi royal family had channeled millions to al Qaeda prior to the bombings, often in contravention of direct guidance from the United States.

But Kagan, acting as President Obama’s Solicitor General, argued that the case should not be heard even if evidence proved that the Saudis helped underwrite al Qaeda, because it would interfere with US foreign policy with the oil-rich nation. She posited “that the princes are immune from petitioners’ claims” because of “the potentially significant foreign relations consequences of subjecting another sovereign state to suit.”

In an interview with the Philadelphia Inquirer published Tuesday, the mother of a man who was killed on United Flight 93 in Pennsylvania said he didn’t know why Kagan argued that the case not even be heard. By keeping the case off the dockets, the Saudis were spared scrutiny of their finances.

“We had hoped she would be with us so that we could have our day in court,” Beverly Burnett said.

“I find this reprehensible,” said Kristen Breitweiser, another family member whose husband was killed in the 9/11 attacks, said at the time. “One would have hoped that the Obama administration would have taken a different stance than the Bush administration, and you wonder what message this sends to victims of terrorism around the world.”(sorry you were one of many fooled maam, they’re one in the same, proven more every day)

The Obama Administration’s decision to intervene in the Saudi-al Qaeda case so irritated two Republican senators that they introduced legislation aiming to ensure that Americans have the ability to sue foreign governments.

Sen. Arlen Specter (D-PA) and Sen. Lindsey Graham (R-SC) offered a proposal to amend the Foreign Sovereign Immunities Act, which Kagan cited as one reason the Saudi case should not be heard. Both senators said that US citizens should be able to sue foreign governments if they are found to be supporting terrorist activity.

Specter, who has since become a Democrat, was unusually blunt.

“She wants to coddle the Saudis,” he said.

David Cameron was today appointed the new UK Prime Minister. This follows five days of negotiation after the May 6...