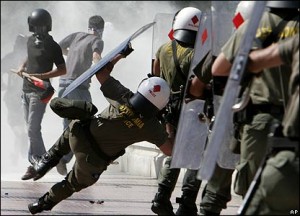 The United States is facing the same fiscal problems as Greece, says Mervyn King, Governor of the Bank of England.

“Bear in mind King is usually one of the most guarded policymakers in both British and central banking circles. Not yesterday,” the U.K. Telegraph reported.

“It isn’t often one has the opportunity to get such a blunt and straightforward insight into the thoughts of one of the world’s leading economic players. Most of this stuff usually stays behind closed doors, so it’s worth taking note of.”

King’s “frank” comments were definitely not “pleasing” to President Barack Obama and to European leaders, the Telegraph reports.

“He also believes that European Union must become a federalized fiscal union ? in other words with central power to tax and spend ? if it is to survive. Just two of the nuggets from one of the most extraordinary press conferences,” the Telegraph reported.

King is not the only leading opinion-maker worried about the parlous fiscal state of the United States.

Nouriel Roubini, appearing on Fox News, notes that the fiscal crisis started in 2007 with too much debt in the private sector.

Now, the United States and Europe have socialized the debt. Trillion dollar deficits are not sustainable, however.

“What has happened in Greece could happen in the U.S. We could have serious problems,” says Roubini, the former Clinton White House economist, and professor at New York University.

Survival Depends On The Passage Of Cantwell-McCain’s Glass Steagall

-Lyndon LaRouche today declared that the only hope for avoiding a near-term collapse of the entire global financial system is...