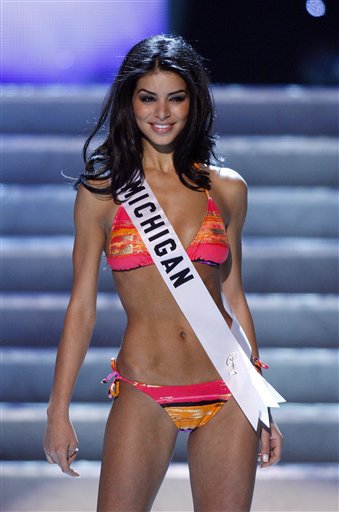 A very strange development this one is, indeed. But we are besieged by the bizarre these days, including the Ground Zero mosque, which some are suggesting is a “flag of conquest.”

Anyway, a thoroughly modern American institution has now been handed to an individual with some particularly odd idiosyncrasies, including having a Muslim background that somehow also allowed her to wear a skin-exposing evening gown and bikini! According to “Detroitistan” resident Debbie Schlussel, this Lebanese-born beauty Rima Fakih also has Hezbollah connections up the wazoo, while her bid for the Miss USA Pageant itself was funded in part by an “ex- Muslim terrorist,” Imad Hamad.

In this regard, MSNBC reports that Ms. Fakih is a member of a “very powerful Shiite family” but asserts that they are not “radicals” and that Rima herself was raised in a very liberal background that taught respect for different faiths. Yet, MSNBC also validates that some of her relatives are Hezbollah members:

As is common among Lebanon’s Shiites, Fakih comes from a large, extended clan that includes everything from supporters of the Islamic militant groups Hezbollah and Amal to secular Shiites and even communists.

The funding by Imad Hamad is confirmed by another writer, Niraj Warikoo, who relates:

For previous pageants, Fakih sought — and received — support from Arab-American leaders in Dearborn, including Imad Hamad, head of the Michigan branch of the American-Arab Anti-Discrimination Committee. His group helped once support Fakih financially, despite opposition from some who felt pageants are “not something they wish to see,” Hamad said.

In 2002, it was reported that Hamad was fighting deportation charges, citing his “membership in an organization prejudicial to the interests of the United States.”

So, many WTFs are in order here, such as also the disclosure of the lovely lady’s previous pole-dancing experience, which included receiving money in her cleavage.

Oh my! How very un-Islamic. Unless you’re from the Middle East and have become accustomed to the centuries-long practice of belly dancing, of course. This, all the while OTHER women can’t show their faces in public because of some purported religious idiocy. Crazy world full of neuroses and psychoses.

Honestly, looking at the images of her pole-dancing, I’d have to say she’s just a girl having some fun. Who is also evidently (merely?) a pawn in a very serious game.

If this pretty young woman is innocently achieving this notoriety through “average American” means, then she could serve as a very effective good-will ambassador in a number of ways, including basically destroying the Muslim-woman stereotype so prevalent these days because of the fanatics. Under such a scenario, I wish her all the best.

In Case You Missed It:  BARBARIC: NYC Mayor Eric Adams Blasts Pro-Lifers, Says Women Have Right to Abortion Up to Day of Birth
Posted in Terrorism and tagged Hezbollah, Islam, Terrorism, United Socialist States of America.

Mervyn King, Governor of the Bank of England, has warned the U.S. is heading for a financial “meltdown.”