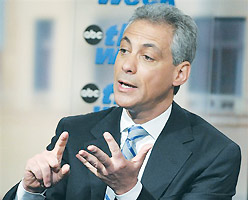 The Obama administration has “screwed up the messaging” about its support for Israel over the past 14 months, and it will take “more than one month to make up for 14 months,” White House chief of staff Rahm Emanuel said on Thursday to a group of rabbis called together for a meeting in the White House.

“During the elections there were doubts about President Obama’s support for Israel, and now they have resurfaced,” Emanuel said, according to one of those who participated in the meeting. “But concerning policy, we have done everything that we can that is in Israel’s security – and long-range interests. Watch what the administration does.”

Dennis Ross, who runs the administration’s Iran policy, tried to allay fears during the meeting that by calling for a nuclear-free Middle East, US policy regarding Israel’s alleged nuclear capabilities was changing.

Since 1995, Ross explained, the administration’s policy, supported by Israel, was to push for a nuclear-free Middle East in conjunction with comprehensive peace. Emanuel, according to a participant in the meeting, said, “We understand Israel’s full layer of deterrence.”

These comments came during the second of two White House meetings with a carefully selected slate of 15 rabbis from across the US representing the Orthodox, Reform and Conservative streams. The first meeting took place on April 20, shortly after Obama was widely perceived to have treated Prime Minister Binyamin Netanyahu shabbily during their last White House meeting.

In addition to Emanuel and Ross, the other administration officials in the meetings were Dan Shapiro, the deputy national security adviser who supervises policy for Israel and its neighbors; Susan Sher, the chief White House liaison to the Jewish community; and Danielle Borin, associate director of the White House Office of Public Engagement and special assistant to Vice President Joe Biden.

Ross opened Thursday’s meeting, saying he hoped that the rabbis “had seen the manifestations of the change” of the administration’s tone since they met the first time a month ago.

He quoted Defense Minister Ehud Barak, who last week in Washington declared that regarding defense and security, the relationship between Israel and the US had never been stronger.

Ross said the US was providing Israel with everything it needed “in a tough neighborhood,” integrating Israel into America’s “military architecture,” especially in the missile defense sphere. Both he and Shapiro were meeting Israeli officials on a weekly basis, either in Jerusalem or Washington, regarding defense issues, Ross added.

Shapiro pointed out that the administration on Thursday announced a $205-million allocation for the Iron Dome missile defense system, on top of the annual $3 billion in military aid. One of the participants in the meeting quoted him as saying there could be no two-state solution without effective missile defense, and no successful peacemaking if others perceived any gap between the US and Israel.

Emanuel said, again according to a participant in the meeting, that he has worked for two US administrations, and was a congressman during a third, and that the cooperation between the two countries on security issues has never been better. But, he said, things have been “static” at “the top,” which has created “some angst” out there. He pointed out that the US pushed Israel’s acceptance last week into the OECD.

Regarding Iran, Emanuel said that the US could not unilaterally impose sanctions and have them be effective. He said that if the US moved before sanctions passed the UN Security Council, it would give a gift to Russia and China and get them off the hook as far as having to take a stand on sanctions.

The sanctions that are being drawn up will not be incremental and will impact the Iranian economy in a serious way, Emanuel was quoted as saying. But the sequence is important, he said, and has to be first UN sanctions, followed by EU ones, and then, finally, by steps from Washington.

Emanuel said that the administration’s priorities in the Middle East center around three issues: isolating Iran, “removing America’s footprint in Iraq,” which is perceived as an intrusion into Arab and Muslim lands, and the Israeli-Palestinian peace process, which he said is key to Israel’s security and also helps both Israel and the US.

Regarding the proximity talks, which will enter a second round later this week with the arrival of US envoy George Mitchell, Ross said both sides needed to create an atmosphere where the talks could succeed. He said the US was not looking to impose a settlement, but that when the sides reached an impasse in negotiations, they often needed a third party to suggest a way to bridge the gaps.

During the first session with the rabbis in April, Emanuel, according to a participant at that meeting, said that Obama understood why Israelis were cynical regarding the peace process, since bilateral negotiations – the Oslo process – led to the terrorism of the second intifada; and unilateral action – withdrawal from Lebanon and disengagement from Gaza – left them with a strengthened Hamas and Hizbullah.

He also said that no Israeli government could make peace without security, and that Israel needed to know that the US was behind it.

Jack Moline, a Conservative rabbi at Congregation Agudas Achim in Alexandria, Virginia, initiated the two meetings after a talk he had with Emanuel about the Obama administration’s perceived deficit of friendliness toward Israel. The meetings were part of a charm offensive after the Obama-Netanyahu meeting last month.

In recent weeks, several high-profile US Jewish communal figures have slammed the Obama administration over the intensity and public nature of its criticisms of Israeli actions.

Moline said the rabbis, all of whom attended both of the meetings, were selected because of the high profiles they have in their communities, and because they had concerns about how the Obama administration was conducting Middle East policy – but they had not displayed outright hostility to the president.

“The rabbis who were in this group were chosen because they’re in touch with their different congregations in different parts of the country,” Moline said.

One source said the meeting was a sign that the administration was concerned they may “be losing the Jews.”

Not all the rabbis came away entirely mollified, but they were impressed by the seriousness of the outreach.

Efrem Goldberg, the rabbi at Florida’s Boca Raton Synagogue, which is Orthodox, said he left the meeting still wondering if the administration is on the right track, but “cautiously optimistic” because of the depth of commitment to Israel he heard.

“I left with a clear impression that these individuals have a real passion about Israel,” even if he did not agree with them on tactics, Goldberg said.

“There was a lot of highlighting of the actual activities and policies of the administration,” Moline said – “and some frustration that” what the Obama administration has done for Israel “has not been comprehensively and accurately reported. They emphasized that whatever the messaging has been over the past year and half, the policies have been in place.”

JTA contributed to this report.

Who is having an "unusual and enjoyable new experience" watching the US-Israel spat? Q: Who said the following? It has...