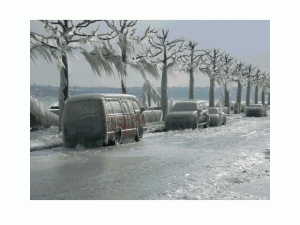 Abdussamatov was speaking yesterday at the Heartland Institute’s Fourth International Conference on Climate Change in Chicago, which began Sunday and ends today.

The Little Ice Age, which occurred after an era known in scientific circles as the Medieval Warm Period, is typically defined as a period of about 200 years, beginning around 1650 and extending through 1850.

Abdussamatov explained that average annual sun activity has experienced an accelerated decrease since the 1990s. In 2005-2008, he said, the earth reached the maximum of the recent observed global-warming trend

Abdussamatov further explained that through 2014 the earth will go through a series of unstable variations in which global temperature will oscillate around the maximum reached in the years 1998-2005.

In 2003-2005, Abdussamatov predicted a reduction of sunspot activity that would reach a new minimum in 2042, resulting in a deep global temperature minimum in the years 2055-2060.

“My predictions are looking better and better with each passing year,” Abdussamatov declared.

In his capacity of the head of the Russian-Ukrainian project “Astrometria” on the Russian segment of the International Space Station, Abdussamatov is conducting additional research to refine his prediction that a new Little Ice Age will begin in 2014.

As seen in Part 2 of the video, Abdussamatov explained to the climate conference that the Russian segment of the ISS is scheduled to collect more precise data on sun activity over the next six years.

“If the Astrometria project is developed in time,” Abdussamatov said, “we will be able to develop a more precise forecast of the duration and the depth of the approaching new Little Ice Age and to understand the reasons of cyclical changes taking place in the interior of the sun and the ways they affect the Earth and various scopes of human activity.”

Abdussamatov’s theory is that “long-term variations in the amount of solar energy reaching the Earth are the main and principal reasons driving and defining the whole mechanism of climatic changes from the global warmings to the Little Ice Ages to the big glacial periods.”

In his speech’s conclusion, Abdussamatov took on advocates of the theory of man-caused warming who want to diminish human use of hydrocarbon fuels. He contended, instead, that a reasonable way to combat coming cooling trends would be “to maintain economic growth in order to adapt to the upcoming new Little Ice Age in the middle of the 21st century.”

Abdussamatov published a paper in which he tracked sunspot activity going back to the 19th century to argue that total sun irradiance, or TSI, is the primary factor responsible for causing climate variations on Earth, not carbon dioxide.

Moreover, Abdussamatov’s analysis of sun activity data has led him to conclude that the Earth is entering a prolonged cooling phase, because sunspot activity is currently in a phase regarded as a “minimum.”

“Observations of the sun show that as for the increase in temperature, carbon dioxide is ‘not guilty,'” Abdussamatov wrote, “and as for what lies ahead in the coming decades, it is not catastrophic warming, but a global, and very prolonged temperature drop.”

Abdussamatov’s paper is featured on page 140 of a 2009 report issued by the U.S. Senate Committee on Environment and Public Works, documenting more than 700 scientists who disagree that global warming is an anthropogenic, or man-made, phenomenon.

As historical support for his theory, Abdussamatov cited the observations in 1893 by the English astronomer Walter Maunder, who came to the conclusion that from 1645 to 1715 sunspots had been generally absent. That period coincided with the middle and coldest part of the Little Ice Age.

Abdussamatov also observed “the most significant solar event in the 20th century was the extraordinarily high level and the prolonged (virtually over the entire century) increase in the energy radiated by the sun,” resulting in the global warming that today climate alarmists believe is a man-made phenomenon.

“The intense solar energy flow radiated since the beginning of the 1990s is slowly and decreasingly and, in spite of conventional opinion, there is now an unavoidable advance toward a global decrease, a deep temperature drop comparable to the Maunder minimum,” he wrote.

In his published paper, Abdussamatov warned that more precise determination of when the global temperature decrease will arrive and how deep it will be may not be available for another eight years from his space station research.

“The observed global warming of the climate of the Earth is not caused by the anthropogenic emissions of greenhouse gasses, but by extraordinarily high solar intensity that extended over virtually the entire past century,” Abdussamatov wrote. “Future decrease in global temperature will occur even if anthropogenic ejection of carbon dioxide into the atmosphere rises to record levels.

“Over the past decade, global temperature on the Earth has not increased; global warming has ceased, and already there are signs of the future deep temperature drop.”

Abdussamatov concluded Earth is no longer threatened by the catastrophic global warming forecast by some scientists, since warming passed its peak in 1998-2005.

“The global temperature of the Earth has begun its decrease without limits on the volume of greenhouse gas emissions by industrial developed countries,” he wrote. “Therefore, the implementation of the Kyoto Protocol aimed to rescue the planet from the greenhouse effect should be put off at least 150 years.”

In 2007, National Geographic published Abdussamatov’s explanation that the global warming observed in the shrinking of the carbon dioxide “ice caps” near Mars’ South Pole was caused by increased solar activity.

“The long-term increase in solar irradiance is heating both Earth and Mars,” Abdussamatov wrote.

The Heartland Institute is a non-profit organization funded by 1,500 donors. The organization says no corporate donor provides more than 5 percent of its $7 million annual budget.