The 7/7 bombings in London, in which Islamists killed 52 and injured 700, prompted British authorities to work with Muslims to avoid future violence.

However, rather than turn to anti-Islamist Muslims who reject the triumphalist goal of applying Islamic law in Europe, they promoted non-violent Islamists, hoping these would persuade coreligionists to express their hatred of the West in lawful ways. This effort featured Tariq Ramadan (b. 1962), a prominent Islamist intellectual. For example, London’s Metropolitan Police partially funded a conference Ramadan addressed and Prime Minister Tony Blair appointed him to an official “working group on tackling extremism.”

In 1953, Dwight D. Eisenhower hosted a group of foreign Muslims that included Said Ramadan (1926-95), a leader of arguably the most influential Islamist organization of the twentieth century, the rabidly anti-West Muslim Brotherhood – and also Tariq’s father. The Eisenhower-Ramadan meeting took place in the context of sustained U.S. government efforts to rally Muslims against Soviet communism, in part by putting Said Ramadan on the CIA payroll. Talcott Seelye, an American diplomat who met with him about that time explains: “We thought of Islam as a counterweight to communism.” 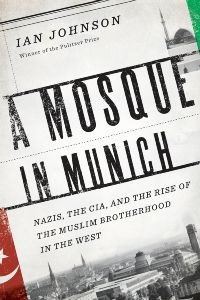 Then there was Hasan al-Banna (1906-49), Tariq’s grandfather, founder of the Muslim Brotherhood, and recipient of Nazi funding, American diplomats in Cairo in the late 1940s had “regular meetings” with al-Banna, found him “perfectly empathetic,” and perceived his organization to be a “moderate” and even a “positive” force. The British apparently offered al-Banna money.In other words, Western governments have a history of ignoring the Islamists’ repulsive ideology and working with them, even strengthening them.

In a stunning piece of investigative historical research, Ian Johnson, a Pulitzer Prize-winning journalist formerly with the Wall Street Journal, reveals new twists and turns of this drama in his just-released book, A Mosque in Munich: Nazis, the CIA, and the Rise of the Muslim Brotherhood in the West (Houghton Mifflin Harcourt, $27).

Johnson opens with a review of the systematic Nazi efforts to recruit Soviet Muslims from among their prisoners of war. Many Muslims loathed Stalin; and between 150,000 and 300,000 of them fought for the Axis in World War II. In other words, over and above their unfulfilled propaganda effort directed at Arabs, the Nazis actually fielded a substantial force of mainly Turkic Muslims under the leadership of a scholarly Nazi enthusiast named Gerhard von Mende.

After the German defeat in 1945, Johnson follows von Mende as he continued his anti-communist work with ex-Soviet Muslims, now in a Cold War context. But his network of former soldiers proved not very competent at the task of arousing Muslim hostility against the Soviet Union. Their leading intellectual, for example, had served as the imam of an SS division that helped suppress the Warsaw uprising of 1944. Islamists quickly proved themselves far more competent at this political and religious challenge. Johnson explains that they “wear suits, have university degrees, and can formulate their demands in ways that a politician can understand.”

The heart of his fascinating study lies in tracing the evolution, much of it in Munich, from old soldiers to new Islamists. It’s a classic tale of 1950s intrigue, complete with rehabilitated Nazis, CIA-front organizations, and dueling Soviet-American ambitions.

Johnson shows how, without anyone quite planning it, the Americans usurped von Mende’s network and handed it over to Said Ramadan. This early U.S. boost to the Muslim Brotherhood, Johnson argues, gave it the means to establish an Islamist framework just in time to welcome the surge of Muslim immigration to Europe in the 1970s.

Thus did the Islamist domination of European Muslims have two hidden facilitators, Nazi and American. Its origins in Operation Barbarossa reveals the ugly pedigree of today’s Islamist strength. Hitler and his thugs could not have foreseen it, but they helped set the stage for Eurabia.

American backing for Islamists prompts Johnson to warn against the futility of allying with the Muslim Brotherhood and its ilk – as Tony Blair once again recently attempted. However tempting, it invariably harms the West. The lesson is simple: be cognizant of history and do not assist the Islamists.

May 25, 2010 updates: (1) The published book lacks photographs to help bring its leading characters come to life. Fortunately, these are available on Ian Johnson’s website. I reproduced some of them above .

(2) Coincidentally, I spent the summer of 1953 at the age of three in Munich, just as that city was emerging as a center of Islamic activism, precisely because of the major presence of ex-Soviet Muslims living there. An excerpt from my father’s autobiography, Richard Pipes, Vixi: Memoirs of a Non-Belonger (Yale University Press, 2003), p. 74 explains why he took the family to Munich:

At the end of May 1951, with financial assistance from the Center of International Affairs at MIT, Irene and I left Daniel with our parents and went on a four-month trip to Europe and the Middle East. My purpose was to interview the surviving members of national governments of what had been the Russian Empire during the period 1917-21. I located quite a few of them in London, Paris, Munich and Istanbul, and they helped me appreciably to understand the complex situations of that era. In Paris I established contact with the Georgian émigré community. Two years later, I spent another summer in Europe, this time in Munich, interviewing refugees from Soviet Central Asia, nearly all of them ex-German prisoners of war. The information they furnished on life in their regions in the 1930s reinforced my conviction that nationalism was well and alive in the borderlands of the USSR and that no mass assimilation was taking place.