Many moons ago, there was a popular TV show called “That’s Incredible.” I’ve been reminded of that program a lot lately, as I’ve heard some truly incredible statements.

The statements I have in mind, had they been uttered by some, would have brought mainstream media attack and outrage and scorn, But because of who uttered them, instead there is media silence.

Ted Turner, Liberal gadfly and original inventor of CNN, suggested that the recent West Virginia coal mine disaster was a message from God, conveying His displeasure with the destruction wrought on the environment by mining. His interviewer never stopped smiling. We’ve heard none of the incredulous outrage aimed at a couple different TV evangelists who, at different times, made similar comments about different disasters.

But crazy Ted’s pronouncement of Old Testament vengeance pales in comparison to President Obama’s treasonous statement of May 18, as he stood with the President of Mexico. Obama said: “Our nations can no longer be defined by our borders.” 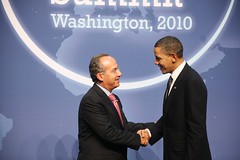 Imagine if a conservative had suggested borders don’t matter. With this statement, Obama once again reveals his complete disregard for his sworn duties as Commander In Chief as well as his anti-American leanings. He doesn’t just ignore the obvious: a nation with undefined, unprotected borders is not a nation at all. He deliberately invites and sanctions the invasion of illegals, and telegraphs his intentions to sacrifice our very sovereignty to a socialist, globalist ideology.

I lived in Phoenix, Arizona for a decade. I wouldn’t live there now. The danger is too great. The city, in fact, the entire state has been abandoned by the federal government, its citizens’ personal safety, as well as their property rights, set aside. Arizona is at war, fighting for its very survival. I have been there recently, I have seen it firsthand.

In siding against Arizona, and against enforcement of its and America’s immigration laws, Obama sides with – or at least enables – Mexico’s vile human traffickers, violent drug cartels, organized crime, as well as the hundreds of thousands invading and taking up residence illegally. In siding against the protection of America, Obama stands for its destruction.

For the first time, we have a President of our United States who is not for these United States. No other conclusion, from the totality of his incredible statements or actions, seems possible.

It is certainly reasonable to have empathy for Mexico’s President, in his desperate civil war with drug-lords’ armies, rampant violence, far-reaching corruption and existential lawlessness. His is a country in collapse, with its chaos threatening us. We hope for his success. But.

Letting that country’s President’s critical statements about ours is unacceptable. That he would dare insult us and attempt dictating to us, incredible.

The only legitimate leader’s response to the Mexican President’s criticism of our nation and its laws, and our besieged border state and its laws, is to say: wait a darned minute. You cannot be our ally if you defy our sovereignty. And there can never be the comprehensive immigration reform (featuring amnesty) that you demand from us until you put a stop – from your side – to the illegal invasion of our nation. Secure your border, sir, while we act to secure ours, and once this is done, as soon as it is done, there may well be bipartisan and widespread citizen support here for immigration reform favorable to people now present here illegally.

As soon as. Not before.

Now, head home and put your house in order before daring to tell us how to manage ours.

One of America's national organizations fighting against illegal immigration is announcing that 17 states are now filing versions of Arizona's...