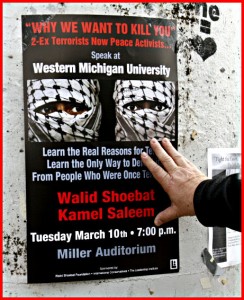 By Walid Shoebat Little is known regarding the founder of the Ground Zero Mosque Faisal Abdul Rauf or his views on Islam. Many view him moderate and others connect him to his father’s affiliation to the Muslim Brotherhood. While others object that this would be guilt by association.

For that we searched Imam Faisal Abdul Rauf’s own words – in the Arabic and not what he says in English to the western media. It should shock every American to find out that Faisal Abdul Rauf stated to the popular Islamic media Hadiyul-Islam (www.hadielislam.com) on May 26th, 2010 in an article by Sa’da Abdul Maksoud.

In it he states that an Islamic state can be established regardless of the government being a kingdom or democracy. In another article titled “I do not believe in religious dialogue” should alarm the ardent skeptic on the mindset of the Islamic visionary who advocates establishing Islamic lobbies throughout the West.

He also admitted that “[In the West] they have separation of church and state, this of course does not exist in any Muslim country. About 99% refuse to separate religion from state and many call for establishing an Islamic Caliphate.”

Regarding religious dialogue Abdul-Rauf stated “this phrase is inaccurate. Religious dialogue as customarily understood is a set of events with discussions in large hotels that result in nothing. Religions do not dialogue and dialogue is not present in the attitudes of the followers regardless of being Muslim or Christian. The image of Muslims in the West is complex which needs to be remedied.”

And when asked about his view regarding an Islamic state he responded that “throughout my discussions with contemporary Muslim theologians that an Islamic state can be established in more then just in a single form or mold. It can be established through a kingdom or a democracy. The important issue is to establish the general fundamentals of Shariah that are required to govern.

It is known that there are sets of standards that are accepted by [Muslim] scholars to organize the relationships between government and the governed.” When questioned that “the current governments are unjust and do not follow Islamic laws” Abdul Rauf commented “new laws were permitted after the death of Muhammad, so long as these laws do not contradict the Quran or the Deeds of Muhammad…so they create institutions that assure no conflicts with Shariah.”

By: Ronald Kessler In his speech at West Point, President Obama claimed credit for having had “more success in eliminating...