I devoted years of my life to the two books on conspiracy theories – but never did anyone allege that a think tank secretly runs the United States. That idea, however, apparently has widespread appeal in Islamabad, Pakistan, according to Sabrina Tavernise writing at “U.S. Heads a Cast of Villains in Pakistan’s Conspiracy Talk“: 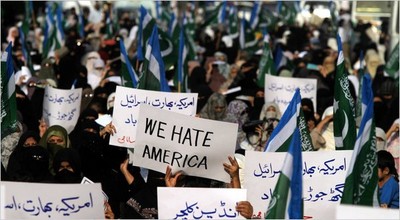 A typical anti-American demonstration in Pakistan.

Americans may think that the failed Times Square bomb was planted by a man named Faisal Shahzad. But the view in the Supreme Court Bar Association here in Pakistan’s capital is that the culprit was an American “think tank.” No one seems to know its name, but everyone has an opinion about it. It is powerful and shadowy, and seems to control just about everything in the American government, including President Obama.

“They have planted this character Faisal Shahzad to implement their script,” said Hashmat Ali Habib, a lawyer and a member of the bar association.

“You must know, you are from America,” he said smiling. “My advice for the American nation is, get free of these think tanks.”

Comments: (1) Of course, as head of two think tanks over the past quarter century, I am curious to know its name. (2) There’s no compliment so sincere as a back-handed one. The notion that a think tank – rather than business or the military leadership – runs the United States testifies that we live in the age of the think tank, or – more broadly – the NGO. (May 25, 2010)

In Case You Missed It:  Retiring Never-Trumper Fred Upton: It Will Be Hard for Uniparty to Stop Trump in 2024 and He Will be the Candidate (VIDEO)
Posted in Terrorism and tagged Daniel Pipes, Faisal Shahzad, Financial, Freedom, Governments, Obama, Pakistan, Terrorism, United Socialist States of America.

European Union to Cut Aid for the Palestinian Authority?

by Daniel Pipes May 24, 2010 updated May 29, 2010 European Union diplomats are warning that unless a breakthrough toward...