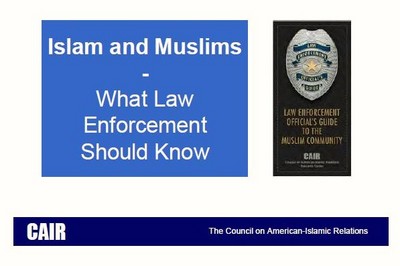 Cover page of CAIR's "Islam and Muslims: What Law Enforcement Should Know."

The Council on American-Islamic Relations aspires to guide public policy toward Muslims and toward this end has published a 127-page PDF document for a seminar, “Islam and Muslims: What Law Enforcement Should Know.” How effective is it?

As usual with CAIR, it contains its share of eyebrow-raising assertions. Some samples:

(1) Other than a few pages about “Interaction with Muslim Individuals,” this seminar outline offers a generic outline of Islam unrelated to issues specific to law enforcement such as strip searches, profiling, arrests on material witness charges, and prison discipline. The document mentions not a single arrest.

(2) This lack of focus makes the document far less effective than it could be. Do street cops really need to learn about attitudes to female newborns in pre-Islamic Arabia (p. 81)?

(3) I imagine the typical street cop will suffer through this boring presentation and promptly forget its non-operational apologetics.