Bond markets could get very nasty over the coming months, while stock investors could take a few months off and stop attempting to trade volatile swings in the markets, Anthony Fry, senior managing director at Evercore Partners, told CNBC Monday. 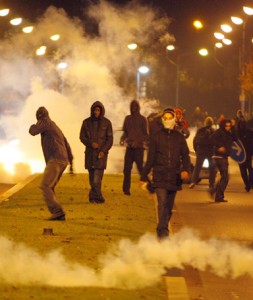 “The current problems will be with us for 5 years or more and uncertainty is very high,” Fry said.

“Sentiment is extremely volatile as shown by the collapse of the Prudential’s attempt to buy AIA. When the deal was thought up just a few months ago it was a very different world,” Fry told CNBC on Monday.

Fry says the best we can hope for in the current environment is a soft landing, but sees little chance of this happening.

“Look at the current situation. You have Greece, now you have Hungary and huge issues surrounding Spain and Portugal,” he said.

Fry believes many European banks have yet to fess up on losses and says governments across the world are between a rock and a hard place.

“Governments need to cut spending and raise money and if they do not do so credibly will be killed by the bond market demanding higher rates,” he said.

Fry sees three outcomes for the global economy and none of them makes very good reading.

“If the nightmare scenario plays out as I suspect it may then the debt situation gets worse. There is currently no exit strategy and the reaction to the crisis of policy makers remains a big worry.”

As a result, Fry is telling investors to play it safe and buy physical assets like land.

“I don’t want to scare anyone but I am considering investing in barbed wire and guns, things are not looking good and rates are heading higher,” he said.

The comments mirror those of bearish Bob Janjuah from RBS, who told CNBC on Friday that we are facing big stock market losses and told investors to get into gold before G20 governments attempt to throw another $15 trillion in quantitative easing in a bid to jump start the economy.

“The policymakers’ response to the crisis has been new debt and this is an old game” said Janjuah.

“Over the next 6 months we will see private sector deflation pushing 10-year yields down to 2 percent,” he predicted.

“This will see the policy makers mistakenly attempt to kick start the economy and market with a global quantitative easing program worth between $10 and $15 trillion dollars.”

In Case You Missed It:  Get Ready for the Economic Collapse
Posted in Financial and tagged Economy, Recession, Riots.

The Muslim Student Union at UC Irvine should be suspended for one year for its involvement in repeated disruptions of...