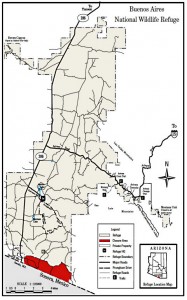 Welcome to the post-America era.

The closure was ordered by the U. S. Fish and Wildlife Service.

The notice was posted by Mitch Ellis, Refuge Manager of the Wildlife Refuge.

“Our concern for public safety is paramount,” Mr. Ellis said. “The situation in this zone has reached a point where continued public use of the area is not prudent. The Buenos Aires National Wildlife Refuge has been adversely affected by border-related activities. The international border with Mexico has also become increasingly violent.”

The area in question is between Casa Grande and Gila Bend.

It is home to pronghorn antelopes, mule and white-tailed deer, mountain lions, and the endangered masked bobwhite quail.

The refuge was noted for its rugged hiking trails that attracted thousands of tourists and its 100 primitive campsites.

Several of these campsites are now occupied by Mexican thugs and gangbangers, including members of MS-13.

Historically, the area served as a major stagecoach and fright line between Tucson and the mining towns of Arivaca in Arizona and Altar in Sonora, Mexico.

Mr. Ellis said that bandits now openly rob visitors to the Wildlife Refuge and that more than 18 bodies were unearthed within the area between 2005 and 2006.

He added that refuge workers are no longer able to clean up the 500 tons of trash that are illegally dumped by illegal border crossers every year, let alone the hundreds of abandoned vehicles that litter the landscape.

We need support from the federal government. It’s their job to secure the border and they haven’t done it. In fact, President Obama suspended the construction of the fence and it’s just simply outrageous.