Vladimir Putin, the Russian prime minister, climbed into the cockpit of his country’s newest fighter jet on Thursday and said it would trump a US-built rival, the F-22 Raptor. 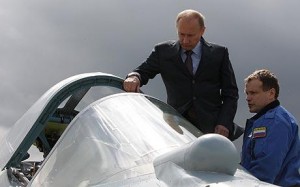 Mr Putin watched a test flight of a “fifth-generation” stealth fighter, dubbed the T-50 and billed as Russia’s first all-new warplane since the collapse of the Soviet Union in 1991.
“This machine will be superior to our main competitor, the F-22, in terms of manoeuvrability, weaponry and range,” Mr Putin told the pilot after the flight, according to an account on the government website.

Mr Putin said the plane would cost up to three times less than similar aircraft in the West and could remain in service for 30 to 35 years with upgrades, according to the report.
Successful development of the fighter, built by Sukhoi, is crucial to showing Russia can challenge US technology and modernise its military after a period of post-Soviet decay.
Russia also plans to manufacture T-50s jointly with India.
The F-22 raptor stealth fighter first flew in 1997 and is the only fifth-generation fighter in service. Fifth-generation aircraft have advanced flight and weapons control systems and can cruise at supersonic speeds.
According to the government website, the test pilot told Mr Putin the controls of the T-50 allowed the pilot to operate most of the plane’s systems without taking his hands off the joystick, which he said would be very useful under high forces of gravity.

“I know, I’ve flown,” Mr Putin replied. Sukhoi has said the plane should be ready for use in 2015.

Elliot Wave Predicts Triple-Digit Dow in 2016 by Peter Brimelow Commentary: If you think things are bad now... An  investment...