The Chinese Communist party called on employers to raise salaries and improve training for workers today, as Toyota became the latest foreign firm to be hit by a wave of high-profile strikes. 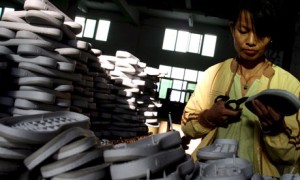 Shoe sole in a factory in Jinjiang, China. Demographic and social changes have slowed the influx of low-cost labour from the countryside. Photograph: San Lang/EPA

The People’s Daily, the mouthpiece of the ruling party, warned that the country’s manufacturing model faced a turning point as demographic and social changes slowed the influx of low-cost labour from the countryside.

Coming a day after the premier, Wen Jiabao, made similar comments, the editorial suggests the authorities may be encouraging businesses to restructure the economy by putting less emphasis on cheap exports and more on higher-value goods and domestic consumption.

For most of the past 30 years, China’s economic growth has been fuelled by low-cost migrant labour. This has helped raise national competitiveness, attract foreign investors and keep consumer prices lower across the world. But members of a new generation of migrants are less willing to endure hardship and many have successfully gone on strike to demand better conditions.

Without mentioning strikes, the People’s Daily said China should adjust to a tighter labour market by improving skills, creating more service-sector jobs and giving workers more cash to spend. This echoed a speech a day earlier by Wen, who said a new generation of migrant workers should be given improved conditions .

“Your work is glorious and should be respected by society at large. Migrant workers should be cared for, protected and respected,” he told workers at the construction site for the No 6 subway in the capital. “The government and the public should be treating young migrant workers like their own children.”

According to labour activists, there have been numerous strikes in recent years, though few get reported in the media. Chang Kai, professor of labour relations and law at Renmin University, said the number had increased by 30% per year.

Their impact has grown as the “one-child” family planning policy starts to thin the bulge in the working-age population. This demographic change in the balance of labour supply and demand has added to improved worker organisation and greater activism at high-profile foreign firms.

Japanese firms have disproportionately been the focus of the reported strikes. The Toyoda Gosei car parts plant, in Tianjin, was shut down by a strike this week until the management promised to negotiate higher wages.

Three Honda plants in Guangdong have been affected, along with a Hyundai factory in Beijing and a Taiwanese rubber products manufacturer in Shanghai. According to Xinhua news agency, the fast food franchise KFC has conceded to a union demand for minimum monthly pay of 900 yuan (£90), up by 200 yuan.

In most cases, however, workers have organised outside the unions, which are seen as close to management and the party. This has sparked commentaries in local media urging unions to mediate more effectively between workers and employers.

Having seen how the Solidarity movement in Poland helped to overthrow a communist government that stopped representing its interests, China’s leaders do not want to alienate the labour force. So far, there is no sign of any mass, nationwide protests. This week’s statements of support for workers’ rights suggest the politburo wants to keep on the right side of the activists.

Posted in Financial and tagged China, Made in China.

Can Obama Shut Down the Internet?

The Internet may have started out as a communications oddity some 40 years ago, but it is now a necessity...