Two Israelis hurt at club in what police call an anti-Semitic attack. A Berlin police spokesman told the Jerusalem Post on Monday that two young Israelis were violently attacked in a Berlin disco because of their nationality. The spokesman said the attack prompted the police to issue a statement terming the attack as “anti-Semitic.” 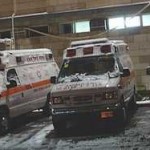 The assault took place in the Berlin district of Friedrichshain, a location popular among young Germans and Israelis for its lively bar and club culture.

The Palestinian fled the disco and tossed a beer glass at the 18-year-old Israeli. The police spokesman told the Post that the authorities are searching for the alleged assailant. In a bizarre twist, the disco’s 43-year-old bouncer used pepper spray against the two Israelis,who eventually fled to their hotel and notified the police about the assault. The injured Israelis received treatment in a hospital.

The number of attacks on Jews in Germany has risen dramatically in June. Dr. Juliane Wetzel, a controversial member of a federally funded commission devoted to researching and combating anti-Semitism, prompted criticism by suggesting Israel is partially responsible for the attacks.

In late June, according to Die Welt newspaper, German pupils of Lebanese, Palestinian and Iranian origin tossed stones at Jewish dancers and shouted “Jews out!” at a dance performance in Hannover. In a statement to the German wire service Juliane Wetzel, said “It’s been true for years that violent attacks on Jews in Germany occur mainly when something happens in the Mideast conflict.”

Dr. Clemens Heni, a political scientist who has written about Islamic anti-Semitism in Germany, told the Post that “Wetzel’s comment is absurd” because she makes “Israel quasi responsible for agitation and attacks against Jews in Hannover.”

Anti-Semitism experts such as the German Jewish journalist Henryk M. Broder have also sharply criticized Wetzel because she frequently plays down the severity of Muslim-based anti-Semitism and has ignored Iranian anti-Semitism while focusing on bias against German Muslims.

In Case You Missed It:  Bidenomics: US To Totally Collapse after Dollar Collapses
Posted in Freedoms, Israel, Terrorism and tagged Germany, Islam.