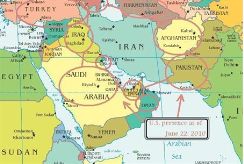 Iran literally is surrounded by American troops, notes an oil market analyst, Energy and Capital editor Christian A. DeHaemer. There is no evidence of an imminent attack, but he connects a number of recent events and the presence of American soldiers to warn that oil prices might soar — with or without a pre-emptive strike aimed at stopping Iran’s nuclear power ambitions.

Iran is bordered on the east by Pakistan and Afghanistan, where U.S. troops have been waging a costly war, in terms of money and lives, against Taliban, Al-Qaeda and other terrorists.

The Persian Gulf is on Iran’s southern border, and last week’s report, confirmed by the Pentagon, that 11 warships had sailed through the Suez Canal, raised alarm bells that the U.S. is ready to fight to keep the Persian Gulf open.

Iran has threatened it could close the waterway, where 40 percent of the world’s oil flows in tankers, if the United Nations or the United States by itself carry out harsh energy sanctions against the Islamic Republic. An Israeli ship has also reportedly joined the U.S. armada.

The U.S.army last year advanced military cooperation with Turkmenistan. An independent Caspian news agency has confirmed unusually heavy activity of American troops along the border with Iran. The Iranian Revolutionary Guards’ Brigadier General Mehdi Moini said last week that his forces increased patrols, including tanks and anti-aircraft units, along the border with Azerbaijan because they noticed increased American activity. Iran charged that Israeli forces were also present, sparking a virtual war alert among the Iranian Guards.

In addition, the Times of London reported earlier this month that Saudi Arabia has agreed to open its air space for Israel Air Force jets, a claim that the Saudi monarchy denied. It similar denied Iranian news agency claims that Israeli helicopters unloaded military equipment at a northwestern Saudi Arabian air base, from where Israeli planes theoretically could reach Iran in the shorts possible time.

There has been no confirmation of Israel-Saudi cooperation from any other source, but one IDF reserve officer, who has been involved in secret military projects for private companies, told Israel National News that the it could be true if both countries found it in their common interests. Saudi Arabia does not recognize Israel and has treated the Jewish State with disdain. However, the possibility of Iran’s dominating the Arab world with nuclear power has changed all political scenarios.

Several defense websites have reported that Israel is deploying one to three German-made nuclear submarines in the Persian Gulf as a defensive measure against the possibility of a missile attacks from Lebanon and Syria, as well as Iran.

“The submarines of Flotilla 7 — Dolphin, Tekuma and Leviathan — have visited the Gulf before,” DeHaemer wrote, “but the decision has now been taken to ensure a permanent presence of at least one of the vessels.”

Amid the buzz of increased military activity around Iran looms the specter of higher oil prices, which is DeHaemer’s field of expertise. “The last oil price shock in the Middle East was in 1990 when the United States invaded Iraq for invading Kuwait. The price per barrel of oil went from $21 to $28 on August 6…to $46 by mid-October. The looming Iran War is not priced in,” he warned in his news letter.

Iran has the third-highest oil reserves in the world and is second only to Saudi Arabia in production. If any action prevents the flow of Iranian oil, the price of “black gold” would soar, he added.   (IsraelNationalNews.com)

By BENJAMIN WEINTHAL Two Israelis hurt at club in what police call an anti-Semitic attack. A Berlin police spokesman told...