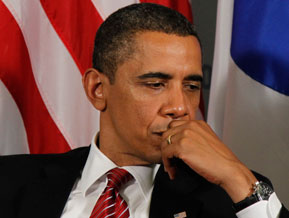 In testimony at Blagojevich’s federal corruption trial, Tom Balanoff said Obama — speaking a day before his Nov. 4, 2008 triumph in the presidential election – said that Jarrett wanted the job and was qualified, although he wanted her to join him in the White House.

Defense lawyers – and now the GOP – have claimed that Balanoff’s version of events conflicts with Obama transition team lawyer Greg Craig’s report on his investigation into contacts between Obama’s inner circle and Blagojevich’s team.

In a memo to the then-president-elect and a subsequent conference call with reporters on Dec. 23, 2008, Craig, who later served briefly as White House counsel, asserted that “The President-Elect had no contact or communication with Governor Blagojevich or members of his staff about the Senate seat.”

Reconciling the accounts of Balanoff and Craig could come down to the question of what the White House’s definition of “communication” is.

Craig insisted that his probe was not limited to the period after the election nor to the Obama allies who were actually members of his transition team or incoming administration.

Craig said during the conference call that his memo “would” cover communications before the election.

“[W]hat we asked, what we wanted to find out was whether anybody in the transition or anybody in Barack Obama’s Timmediate circle — meaning his friends or associates — had any conversations at any time with the governor or with the governor’s staff or representatives of the governor about the replacement for the president-elect in the event he was elected president,” Craig said in response to a question.

But there was no mention of Obama contacting Balanoff in the memo – only a brief reference to Balanoff discussing his Blagojevich meeting with Jarrett.

But the Republican National Committee seized on the testimony as evidence that the White House plays fast and loose with self-investigation and attempted to connect dots between the matter and a White House memo on the administration’s efforts to get Rep. Joe Sestak out of the Pennsylvania Democratic Senate primary.

“The fact that Balanoff’s sworn testimony contradicts the account given by the President’s lawyer is only further evidence that this White House is incapable of investigating itself,” RNC spokeswoman Katie Wright said. “Like the Sestak memo, there are troubling discrepancies that place the validity of the entire account in jeopardy. This shouldn’t come as a surprise since the primary role of the White House Counsel’s office is first and foremost to protect the President.”

Nobody at the White House appears to be in legal jeopardy but the trial has turned a spotlight on relationships among the president, his close political allies and the accused.

Prosecutors are interested in Balanoff’s interactions with Blagojevich because they accuse the former governor of attempting to sell his power to appoint Obama’s successor in the Senate following the presidential election.

Balanoff, a close Obama ally and top official with the Service Employees International Union in Chicago, said Blagojevich countered his pitch for Jarrett by suggesting he be appointed Secretary of Health and Human Services.

Balanoff says he met with Valerie Jarrett and Alexi Giannoulias, the current Democratic Senate nominee, to talk about his conversation with Blagojevich the day after the election.

“I said: ‘He said some goofy stuff … he could be Secretary of Health and Human Services.'” Balanoff added. “I told her I told him that wasn’t going to happen. We both laughed.”

But he made it clear that his local, which represents 40,000 janitors and security guards, wouldn’t support Blagojevich if the governor wouldn’t back Jarrett.

The judge in the case turned down defense lawyers’ attempt to secure a subpoena for Obama’s testimony, but several White House officials and lawmakers have received subpoenas.

Iran is Surrounded by US Troops in 10 Countries