Children as young as five are being used by the Taliban to lay bombs and carry weapons in a deadly new tactic in Afghanistan, it can be disclosed. 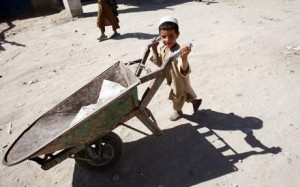 In the past five months the number child insurgents has increased almost fivefold in the town of Sangin, to a band of 40, who are used to run weapons, plant bombs and carry out tasks for the Taliban, The Daily Telegraph has learnt.

According to military intelligence sources there are about 12 children being routinely used in the Sangin area just to plant bombs.

The Taliban have resorted to the tactic because they know that British troops are unlikely to fire on children planting IEDs (improvised explosive devices). They have also been forced into the change because sophisticated surveillance technology is able to pick up Taliban IED planting teams and take action against them.

On one occasion surveillance cameras picked up two children under 10 walking along the main road with one placing an IED in a hole followed by another covering it up with a bag of stone and earth.

“They know that we won’t engage the kids,” said an intelligence source with 40 Commando, Royal Marines, based in Sangin. “The kids are less aware of the risks and will to do anything for a quick buck.

“But it’s really exploiting children. The parents are upset they do this but they are very, very intimidated by the Taliban.”

There have been 44 roadside bombs in Sangin in the past months, a fifth were carried out by children.

At least one child has been killed in the last month laying an IED. Two other youngsters from his team turned up at the Marines’ base one missing a hand and the other was later found with batteries, tape and wire on him.

“We have child accessories not child soldiers,” said Major Ed Moorhouse, commander of Charlie Company, 40 Cdo. “They are entirely indoctrinated from an early age, very battle hardened and the Taliban know that our Western values inhibit us from firing on children.”

In another incident that left the Marines deeply shocked a teenage boy, believed to be 14, arrived at a compound where he started chatting to one of commandos.

“We were having a joke, he wrote his name on my hand and then asked me if I was an officer,” said Marine Tim Jones, 26, a Pashtun speaker. “He just seemed like a normal teenager but he had come in with an agenda.”

Twenty minutes later the boy returned and went up to the corporal in charge of the patrol who was carrying a radio and detonated a suicide vest. But it is believed the boy put the vest on the wrong way round and caused only minor injuries to the corporal while killing himself.

“It’s still difficult to take in that they are using kids to fight against us,” said MnE Jones. “You feel sorry for them really because they are taken away at such a young age that they don’t get a chance to choose.”

Children are also used to approach Royal Marine patrols to identify commanders or officers who are then targeted by bombers or gunmen.

They will also carry guns or rocket-propelled grenades for the Taliban to be used in ambushes or are asked to connect IEDs to batteries.

Taliban commanders are also thought to develop a “cult of hero worship” around children.

“They are fully aware that we will not engage children except in extreme circumstances,” said Company Sergeant Major Buck Ryan.

“I feel for the children. I have a 14-year-old son and to think of him doing something like that, to kill people, is horrific.

“Life is cheap out here, there’s no question of that.”

During one gunfight on a police check point yesterday, witnessed at a distance by The Daily Telegraph, an eight-year-old girl was struck in the back of the head by a bullet believed to have been fired by insurgents. She was in a stable condition after the bullet skimmed the top of her head causing a deep gauge.