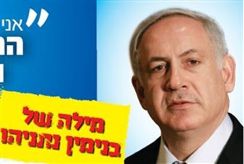 A Promise is a Promise ad

The “A Promise is a Promise” campaign has put up billboards quoting statements from Netanyahu and members of his cabinet which unequivocally confirm that the current Judea and Samaria building freeze will not be extended.

“The things that the prime minister, and most of his ministers, said regarding the fact that the freeze will not be extended are very clear… This is a contract between elected officials and the public – they gave their word – their trustworthiness lies in the balance,” said Judea and Samaria council head Danny Dayan.

Netanyahu agreed to prohibit construction in Judea and Samaria for ten months in order to bring the Palestinian Authority to the negotiating table. The PA has refused to hold direct talks, demanding that Israel first freeze construction in much of Jerusalem, but has agreed to indirect “proximity talks” through American mediators.

Netanyahu has repeatedly said that the building freeze is a one-time, temporary measure, members of the Yesha council said. However they said, “These statements will shortly be put to the most decisive test, the American test.”

“Netanyahu is flying to Washington next week, and there he will apparently be pressured to continue the freeze,” they explained.

PA Chairman Mahmoud Abbas has upped pressure to continue the building freeze, telling American officials that he will consider direct talks in four months – if the freeze is made permanent.

Last Thursday, the Likud Central Committee unanimously adopted a resolution supporting construction in Judea and Samaria when the 10-month freeze ends. On Monday, Members of Knesset, led by MK Yaakov Katz, held a conference on the damage caused by the freeze to date. (IsraelNationalNews.com)