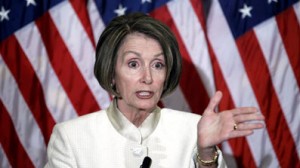 Talking to reporters, the House speaker was defending a jobless benefits extension against those who say it gives recipients little incentive to work. By her reasoning, those checks are helping give somebody a job.

“It injects demand into the economy,” Pelosi said, arguing that when families have money to spend it keeps the economy churning. “It creates jobs faster than almost any other initiative you can name.”

Pelosi said the aid has the “double benefit” of helping those who lost their jobs and acting as a “job creator” on the side.

“It’s impossible to think of a situation where we would have a country that would say we’re not going to have unemployment benefits,” Pelosi said.

Democrats have been trying for more than a month to pass a bill extending jobless benefits to more than 1 million people. Currently, jobless benefits last nearly two years — up to 26 weeks paid by state treasuries with federal help for up to an additional 73 weeks.

Of course, those workers could be sending a lot more money into the economy if they had jobs since unemployment benefits generally do not cover the entire cost of lost wages.

The counterintuitive statement drew jeers from Republicans, who claim Democrats can’t figure out any way to tackle the economic slump that doesn’t involve spending massive amounts of taxpayer money.

Despite the wave of unemployment aid and stimulus spending dating back to the end of the Bush administration, the jobless rate is still hovering close to 10 percent. New figures out Thursday showed new jobless benefits claims rising for the second time in three weeks.

Rep. Dave Camp, R-Mich., on Thursday called the newest extension plan “fiscal insanity” because it is not paid for and will only create future problems.

“I support, and Republicans have supported, extending unemployment benefits, but we must not do so at a cost to the deficit, to the economy and to future generations. Our inability to get our fiscal house in order isn’t just damaging future generations; it is wreaking havoc on jobs today,” he said in a statement.

by Hana Levi Julian Russians are registering concern over Moscow's recent cancellation of its deal to sell Iran the S-300...