A week of bloodshed in the run-up to important Mexican regional elections culminated overnight in a savage gunfight between rival drug gangs in which at least 21 people were killed a few miles from the US border.

Police arrested nine people, six with gunshot wounds, after the predawn gun battle left dead bodies strewn across a rugged rural area known as a smuggling route. Shootouts between the different drug cartels are common, but the firepower on display was particularly large. 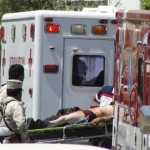 The violence provided an inauspicious backdrop to Sunday’s elections in which almost half of Mexico’s 31 states are voting for mayors, local deputies and governors. The campaigns have been marred by drug-trafficking violence, alleged paramilitary violence and espionage, as well as an ominous sense of a democracy on the edge. Around 27,000 people have been killed in drug-related violence since 2007.

“The stage for Sunday is looking rather terrifying in some cases,” Mexico’s former human rights ombudsman Emilio Alvarez Icaza told MVS radio. “I don’t think we have reached the bottom yet.”

Tension surged through the week after the murder on Monday of the frontrunner in the election race in the north-eastern state of Tamaulipas. The death of Rodolfo Torre Cantú was the highest profile political assassination since Luis Donaldo Colosio, a presidential candidate, was killed in 1994 and was a clear sign that drug violence has now become a major factor in Mexican politics.

Cantú was gunned down on his way to a campaign rally in an ambush by hitmen reportedly dressed as marines but assumed to belong to one of the cartels operating in the area. His candidacy has been taken over by his brother Egidio Torre Cantú. The cover of the latest issue of the weekly news magazine Proceso featured a map of Mexico highlighting the states with elections beside the headline Narcoelecciones.

The state most directly affected by drug trafficking and the cartels is Chihuahua, location of Ciudad Juárez, which many now claim is the most violent city in the world. A top prosecutor was killed in the city on Wednesday when gunmen attacked the car she was travelling in. The following day a decapitated body and its severed head were left outside the house of the frontrunner in the mayoral race. Héctor Murguía has been accused during the campaign of having links to one of the gangs fighting for supremacy in the city.

Juárez was not included in the list of smaller municipalities deemed too dangerous to campaign in by the state electoral authorities. They are expecting turnout to be particularly low.

Beyond the threat of violence, the drug wars are particularly tightly entwined with the campaign in the Pacific coast state of Sinaloa. One of the leading candidates has been regularly accused by his opponents of being a friend of Ismael “El Mayo” Zambada García, one of the country’s leading drug barons. Although Jesús Vizcarra Calderón insists he has never done anything illegal, he has repeatedly refused to deny the association.

In the southern tourist-dependent state of Quintana Roo, the election has been deprived of one of its most colourful candidates, arrested on drugs charges in June. Federal prosecutors say Gregorio Sanchez received millions of dollars for protecting traffickers while he was mayor of the resort city of Cancún.

With apprehension riding high, Mexico’s government has promised additional security during the poll with the interior minister, Fernando Gómez Mont, calling this “a difficult moment for the nation”.

An increasing number of observers blame the escalation of the violence in recent years on a major federal offensive against the cartels – launched by the president, Felipe Calderón, in December 2006 – which failed to tackle money-laundering and political infiltration by the gangs.

“The expansion wave of impunity is reaching further all the time,” Alvarez Icaza said. “This leads me to the conclusion that things are going to get worse.”

In a separate development, Mexican police said today that a US embassy employee killed in March in Juárez was targeted because she gave visas to a rival drug gang. Jesus Ernesto Chavez told police that he ordered the 13 March attack that killed Lesley Enriquez and her husband as they left a birthday party. Police say Chavez works for Barrio Azteca, a gang that works for the Juárez cartel.

In Case You Missed It:  RED SHIFT: 162 Scientists who used to work for a top US nuclear research base now work for the CCP
Posted in Freedoms and tagged Illegal Immigration, Immigration.

I hope the White House is paying attention to the latest annual Congressional Budget Office Long-Term Budget Outlook, which offers...