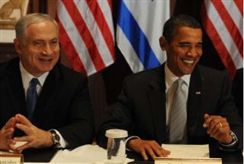 Time is working against U.S. President Barack Obama, who appears to be “detached” from Israel, former U.S. Middle East negotiator Aaron David Miller wrote in Politico.com Tuesday. He maintains “there is not much of a U.S. strategy yet” for Middle East peace.
President Obama and Prime Minister Binyamin Netanyahu are to meet Tuesday evening as the American government pulls out all stops for high-profile publicity to rectify the damage of an anti-Israel image it has created. The Republican party has pounced on President Obama for his shabby treatment of Prime Minister Netanyahu during his visit earlier this year and for its lukewarm support of Israel over the flotilla clash with Turkish terror activists.

Miller, who has become decidedly more skeptical since his years of negotiating for both Democratic and Republican presidents, wrote, “Unlike Netanyahu, Obama does seem in a hurry. He wants a two-state solution on his watch. Time is not his ally.

“It is not entirely clear why Obama considers this matter so urgent… If Washington presses too hard with its own ideas now, it could lead to a crisis, the breakdown of negotiations or the need for a premature U.S. plan. None of this would be good for Obama.”

As for Prime Minister Netanyahu, Miller explained there are two sides of the man – the tough-talking ideological Zionist and a pragmatic statesman. “Which version of the PM will show up in Washington?” Miller asked. “Both, of course.”

Arab skepticism and expectations of President Obama are high, and a failure to meet Palestinian Authority demands of a total building freeze for Jews in Judea and Samaria would likely add another black mark to the president’s policies that  have contributed to a sinking popularity. (IsraelNationalNews.com)