The current occupant of the White House claims to know how to create jobs. He claims jobs have been created. But so far the score is Great Obama Depression 2.2 million lost jobs, Obama 0 — a blowout. 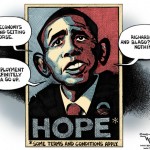 Obama is as hopeless, helpless, clueless and bankrupt of good ideas as the manager of the Chicago Cubs in late September. This “community organizer” knows as much about private-sector jobs as Pamela Anderson knows about nuclear physics.

It’s time to call Obama what he is: The Great Jobs Killer. With his massive spending and tax hikes — rewarding big government and big unions, while punishing taxpayers and business owners — Obama has killed jobs, he has killed motivation to create new jobs, he has killed the motivation to invest in new businesses, or expand old ones. With all this killing, Obama should be given the top spot on the FBI’s Most Wanted List.

As far as the taxpayers — the people who actually take risks with our own money to create small businesses and jobs and pay most of the taxes — we require protection under the Endangered Species Act.

You won’t find proof of the damage Obama is doing on Wall Street, but rather on Main Street. My friends are all part of the economic engine of America: Small business. Small business creates 75 percent of new jobs (and a majority of all jobs). I called one friend who was a wealthy restaurant owner. He says business is off by 60 percent. He’s drowning in debt. He won’t last much longer. His wealth is gone.

I called another friend in the business of home improvement. He says business is off 90 percent from two years ago. My contractor just filed personal bankruptcy. She won’t be building any more homes. The hair salon where I’ve had my hair cut for years closed earlier this year. Bankrupt. But here’s the clincher — ESPN Zone just closed all their restaurants across the country. If they can’t make it selling cheap food and overpriced beer with 100 big screens blaring every sporting event on the planet to a sports-crazed society, we are all in deep, deep trouble.

I’ve polled all my friends who own small businesses — many of them in the Internet and high-tech fields. They all agree that in this new Obama world of high business taxes, income taxes, payroll taxes, capital gains taxes, and workers compensation taxes, the key to success is to avoid employees. The only way to survive as a business owner today is by keeping the payroll very low and by hiring only independent contractors or part-time employees provided by temp agencies.

The days of jobs in the private sector with big salaries, full benefits, and pensions are over. We’ve all seen where those kinds of jobs get you as a business owner — in Bankruptcy Court or surviving on government welfare like GM and Chrysler. Or in the case of government itself — completely insolvent, but surviving by ripping off taxpayers and fraudulently running printing presses at the Fed all day and night to print money by the trillions.

Unfortunately, small businesses don’t have the power to impose taxes or print money. So unlike government, we’ll just have to cut employees and run lean and mean.

It has now become clear that, outside of the burgeoning field of Census takers, there will be no major increase in new jobs for years to come. Outside government, Obama has created a wasteland of economic ruin and depression that looks much like the landscape of Mel Gibson’s first movie “Mad Max.” Without a printing press in Obama’s world, you’re just plain out of luck.

The days of believing the Obama propaganda about a jobs recovery are over. The trillion-dollar corporate handouts (neatly named “stimulus”) may have kept big business in the money for the past 18 months, and artificially propped up the stock market, but small business is the real canary in the coal mine.

My small business-owning friends aren’t creating one job. Not one. They are shedding jobs. They are learning to do more with fewer employees. They are creating high-tech businesses that don’t need employees. And many business owners are making plans to leave the country. In a high-tech world where businesses can be run from anywhere, Obama has a problem. His one-trick pony — raise taxes, raise taxes, raising taxes — is chasing away the business owners he desperately needs to pay his bills.

So what is Obama going to do? Maybe he can get Pamela Anderson on the line.

Wayne Allyn Root, a former vice presidential nominee for the Libertarian Party, writes from Henderson. His column appears every other week.

In Case You Missed It:  Georgia Sham Grand Jury Subpoenas Rudy Giuliani and Lindsey Graham to Testify before Their Anti-Trump Charade
Posted in Tyranny and tagged Obama, Obamanomics, Recession, Unemployment.

The Dow Jones Industrial Average is repeating a pattern that appeared just before markets fell during the Great Depression, Daryl...