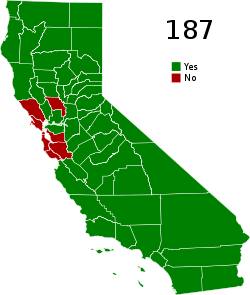 Of all the issues in which inside the beltway groupthink cloud good judgment, none is more obvious than the tales of immigration and the decline of the GOP.

The issue is best summed up by the strategic thinkers inside both the Democrat and Republican Parties who say that opposition to “comprehensive” immigration reform will somehow doom the GOP to permanent minority status.

They all take it a step further and say, “Look what happened to the California GOP with Prop. 187.” Back in the mid-90’s, the California GOP pushed a series of ballot propositions dramatically curtailing affirmative action and illegal immigration. Proposition 187 in particular is the one everyone talks about — Republicans and Democrats.

For the record, Proposition 187 was a ballot proposition in California in the mid-nineties that barred illegal aliens from taking advantage of government services. Heavily campaigned against by many Democrats and Republicans, it still passed.

Most people look at the timing and presume 187 and the annihilation of the GOP in California were related. But just because two events happen around the same time do not make them related — Lindsey Lohan skipping off to Europe to avoid going to court had nothing to do with her complicit involvement in the BP Oil Spill.

We have to address this because the same myth builders who tell us Proposition 187 killed California are telling us the Arizona immigration law will kill the Arizona GOP. Sean Trende makes a very powerful case that this argument, like Proposition 187 wiping out the California GOP, is complete and utter nonsense.