More and more Americans are afraid we’re heading for a double-dip recession. President Obama says our way out of our economic slump is to double American exports over the next five years. But China’s go-go economy is slowing down, while Europeans are announcing austerity programs from London to Athens and all points in-between. If the world is contracting, who’s going to buy all the stuff we plan to export?

And then there’s the question, “WHAT are we going to export?” There are more Americans employed in government than there are manufacturing and construction. It’s been that way since 2007 and it’s getting worse. Our manufacturing base has been hollowed out and shipped overseas by the same Wall Street chuckleheads who tell us Americans are too lazy to do these jobs. 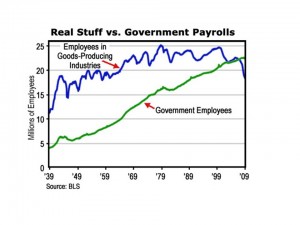 This chart shows people employed in manufacturing, mining, logging and construction versus jobs for federal, state and local government employees (including teachers). You can see this trend isn’t good.

So I’d say Obama’s Plan A is SNAFU’d. Meanwhile, about 49 of the 50 states are running budget deficits that they can only balance by slashing expenses. Congress has shown it’s in no mood for a second stimulus package. Yeah, I’d say worries about a double-dip in the economy are right. And if things aren’t handled correctly in Washington — and you’ve got to admit their track record isn’t good — never mind a recession, we could even see another depression.

So what are we going to do? Some answers are elusive, but others are obvious — at least to me. Too bad there’s no one with any guts in Washington, because doing any of these things requires putting the country ahead of special interests.

Still, since I’ve got the soap box, here’s what I would do …

#1) Stop funding other countries, particularity Palestinians and Afghanistan. Billions of dollars in aid to Afghanistan have been tracked to Dubai, where well-connected Afghans buy luxury villas built along the beaches of the Palm Jumeirah — a man-made island shaped like a giant palm tree — and live it up on your tax dollars. The Afghans looting it up in Dubai include a brother and a cousin of Afghan President Hamid Karzai. So, you can see that Afghanistan is rotten to the very top. We don’t want to spend another damned dime there! In Gaza millions of U.S aid has been traced back to terrorist organizations that despise the United States and it freedoms.

#2) Hit China Where It Hurts. I’m so sick of China’s song and dance about how they might allow the value of their currency, the yuan (or renminbi), to climb a little. They’ve been playing this “maybe we’ll let the yuan float” game since 2005. For Pete’s sake, why does anyone believe them? China’s artificially low currency is a HUGE trading advantage that is sucking American jobs overseas. It needs to stop — NOW!

The “free marketeers” will tell us tariffs are bad. Well, tariffs were good enough for our founding fathers, who slapped big tariffs on goods from England, another country that waged economic war against us after the Revolutionary War. And frankly, after all the bank bailouts, Detroit handouts, and Wall Street welfare going on for at least the last two decades, no market is truly free.

To be sure, slapping a tariff on Chinese imports would make prices of all the goods we buy from China — most everything you buy from Wal-Mart — go up by 30% or more. It would be a HUGE dislocation in our economy as well as theirs. I’m not saying it would be fun — I’m saying it’s necessary. Our throw-away lifestyles are being artificially propped up by the fact that we’re shipping our manufacturing base piece-meal to China.

And sure, China would probably retaliate by slapping a tariff on goods we sell them. They have more to lose than we do. China’s exports increased 48.5% in May from a year earlier.

But you know what else a tariff program would do? It could start pulling jobs back from China to the U.S. The problem is that the jobs could just go to another low-wage manufacturing country. That’s why we need to put “fair-wage” tariffs on all imports. The alternative is to see America’s manufacturing base continue to be eaten away until our economy is as rotten and hollow as a termite-infested log.

One last thing: The U.S. trade deficit was $380.66 billion in 2009. If we could cut that in half, that would be effectively a $190 billion stimulus package every year, without incurring any debt in the process.

#3) Reinstate Glass-Steagall. The financial reform getting worked over in Congress right now is a toothless wonder. It does nothing to address the main problem on Wall Street, which is that the banks we apparently can’t allow to fail are entwined with the trading houses that are ripping us off.

At one time, banks did boring ol’ banking and brokers gambled with other people’s money. This was due to the Glass-Steagall Act, passed in the 1930’s to help prevent a recurrence of the 1929 market crash and the Great Depression. It provided strict separation of the activities of various types of financial firms, the overlapping of which was significantly responsible for creating the late 1920’s market bubble and subsequent crash.

Since some of the banks we bailed out have paid back some of the money, the total cost of the bailout is now expected to be $89 billion. Since Wall Street will repeat its mistakes unless we change things, reinstating Glass-Steagall will probably save us at least another $89 billion.

#4) Close the Revolving Door between Wall Street and Washington. The major players shuttle between top jobs in Washington and Wall Street. As a result, the government is “captured” and in effect becomes an arm of Wall Street, passing laws to make bankers richer rather than protecting average citizens.

In the late 1990s, Sandy Weill, then head of Citicorp, led the fight to rescind Glass-Steagall. Phil Gramm, the chairman of the Banking Committee, worked with Citigroup lobbyists to get it the repeal passed. The repeal was called the Gramm-Leach-Bliley Act after the three Republican senators who pushed it through Congress. President Clinton embraced the repeal.

According to PBS’s “Frontline,” just days after the Treasury Department agreed to support the repeal, Clinton’s Treasury Secretary, Robert Rubin, accepted the job as Weill’s chief lieutenant at Citigroup. Phil Gramm went on to become an executive at UBS, another giant bank that was a big beneficiary of repeal.

What is needed is obvious. If you work in the government, you can’t work on Wall Street for 5 years. Period. That may mean we’ll have to accept that we don’t have the best and brightest in those jobs. Considering that the best and brightest seem to be ripping us off, I’ll settle for competence and adherence to the spirit as well as the letter of the law. It will be far less expensive.

#5) Seal off the borders, Billions are being spent schooling, hospitalizing, illegal aliens whom do not pay into our tax system, They are draining local coffers, bankrupting states, leaving millions in unpaid medical bills and filling our prisons to near full compacity.

Lawmakers across Capitol Hill, both Democrats and Republicans, were surprised to learn recently that the Obama administration has made reaching...