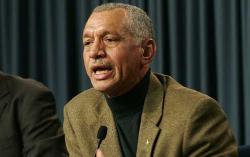 Rep. Pete Olson, the ranking Republican on the House Subcommittee on Space and Aeronautics, got a call from NASA Administrator Charles Bolden on June 28, the day the White House released its new long-term plan for the space program. “He ran down some of the things from the president’s new space policy, and mentioned outreach to Muslims,” Olson recalls. “That stunned me. I didn’t believe it.”

Rep. Gabrielle Giffords, the Democrat who chairs the subcommittee (and is also married to astronaut Mark Kelly), got a briefing from Bolden the same day, according to a spokesman.

As it happens, Bolden’s calls to Giffords and Olson came several days after Bolden discussed the Muslim initiative with Al Jazeera. According to a NASA spokesman, Bolden sat down with Al Jazeera’s Imran Garda on June 17, during a stop in Doha, Qatar. Bolden’s Mideast trip, which was timed to mark the first anniversary of President Obama’s June 2009 Muslim outreach speech, was devoted to pursuing “a new beginning of the relationship between the United States and the Muslim world.”

During the interview, Bolden told Al Jazeera that the “foremost” mission he had been given by Obama was “to find a way to reach out to the Muslim world and engage much more with dominantly Muslim nations to help them feel good about their historic contribution to science, math, and engineering.”

The Al Jazeera interview did not air until June 30, after the Obama space plan was released and Bolden briefed members of Congress. But there’s no question Al Jazeera got the word first.

Although few, if any, lawmakers knew it, Bolden had previewed the idea even earlier. In a February 2010 blog item, the Orlando Sentinel reported that Bolden told a group of engineering students Obama had asked him “to find ways to reach out to dominantly Muslim countries.”

“We now have expanded our efforts to reach out to non-traditional partners,” Bolden said, according to the Sentinel. “We really like Indonesia because the State Department, the Department of Education [and] other agencies in the U.S. are reaching out to Indonesia as the largest Muslim nation in the world. We would love to establish partners there.”
Bolden might find some resistance to his plans on Capitol Hill. Olson is confident the public will disapprove of the whole Muslim outreach venture — if they hear about it. (So far, the story has gone unreported by the New York Times, the Washington Post, and the nightly newscasts of ABC, CBS, and NBC.) Republicans need to “make sure the American people knows what’s out there,” Olson says. “When the American people hear this, I’m comfortable that people are going to think, ‘That’s not what I want my money spent on.’ ”

It’s unlikely majority Democrats would crack down on NASA, but the space agency could be in for some serious questions if Republicans win the House of Representatives this November. “If we get the majority, then we’ll have a say,” Olson says. “We can de-fund things, and this would be a prime candidate in my mind.”

Bolden has not commented on the controversy. As for the White House, a spokesman says President Obama wants NASA “to engage with the world’s best scientists as we work together to push the boundaries of exploration.” That doesn’t sound much like Bolden’s description of the initiative, which foresees the U.S. working with Muslim nations that don’t have the scientific know-how for manned space flight. What advanced technology do they have that the United States doesn’t?
For space veterans, the controversy is an indication of how far the Obama administration has strayed from NASA’s original mission, first laid out in the National Aeronautics and Space Act of 1958. “NASA was chartered … to develop the arts and sciences of flight in the atmosphere and in space and to go where those technologies will allow us to go,” says Mike Griffin, who headed the space agency from 2005 until 2009. The Space Act has guided NASA well for more than 50 years, Griffin says, and now, “I think the president should be required to go back and read it.”

New Black Panther Obama DOJ refused to prosecute: 'I hate white people – all of them!'