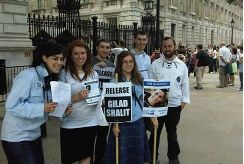 The world soccer federation FIFA has banned the waving of “Free Shalit” flags at the World Cup, calling it a political act. Fearing lawsuits and political recriminations, the Johannesburg Jewish Community Center called off a planned flag-waving protest at the World Cup finale between Spain and Holland Sunday.   The FIFA decision prevents the flags from being seen by hundreds of millions of viewers throughout the world who are expected to view the championship game. Shalit was kidnapped four years ago last month by Hamas and allied terrorists in an attack on an Israeli army checkpoint at a Gaza crossing.

“Free Shalit” flags have been seen at games at the South African stadium where the World Cup is being held, but the organized e-mail campaign for Sunday’s game prompted FIFA to officially ban the rally.

Hamas has not honored the Geneva Convention, which requires that Red Cross officials visit prisoners of war and act as mediators for communication with the victim’s family. His condition is not known.

In Israel, Shalit’s family has conducted a new media-sponsored campaign to free the soldier at “any price.” Counter-protestors have demonstrated for his release without any price, and have cited previous “price tag” releases of terrorists that have boomeranged, resulting in the deaths of nearly 200 Israelis by terrorists who were freed.

Obama: Israelis Mistrust Me Because My Name is Hussein

by Hillel Fendel  In an exclusive interview with Israel’s Channel Two, U.S. President Barack Obama was asked why he thinks...