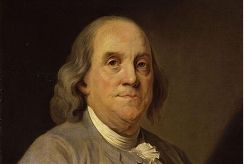 “If you read about the literature and heritage of America, you will see that they consider former U.S. President (sic) Benjamin Franklin to be one of their greatest minds,” Al-Hamadi began. “When you read about U.S. heritage, you encounter words written in ink of gold. The Americans endorse the words of Franklin, but when he talks about the Jews, they ignore his words completely.”

“He (Franklin) lived in 1779, and delivered a famous speech. Addressing the American people, he talked about an immense danger that faced them. He said: ‘Do not think that by achieving our independence, the United States is safe from all danger. There is an immense danger…’

“These were his words. ‘An immense danger faces the American people – the proliferation of Jews in the United States.’ He went on to say: ‘The Jews are devils and bats. We must expel these sinners…’ These are his words, not mine. We must expel this group of sinners from the United States, and if you don’t do this immediately, our future generations will curse you, when they find themselves under the boots of the Jews.’

It turns out, however, that Al-Hamadi’s claim is based on a classic anti-Semitic canard called The Franklin “Prophecy,” a falsified document debunked many decades ago. A 2004 report issued by the U.S. Congress, “Anti-Semitism in Europe: Hearing Before the Subcommittee on European Affairs of the Committee on Relations” describes the fake on page 69:

The Franklin “Prophecy” is a classic anti-Semitic canard that falsely claims that American statesman Benjamin Franklin made anti-Jewish statements during the Constitutional Convention of 1787. It has found widening acceptance in Muslim and Arab media, where it has been used to criticize Israel and Jews…”

But it was actually proven false as far back as 1954, when the New York-based Anti-Defamation League issued a detailed refutation of the hoax, which apparently first appeared in 1934.

As for Benjamin Franklin, his liberal attitudes towards people of all religions were well known; in fact, his donation of five pounds of his own money to the building of a synagogue in his city during the fund-raising campaign of the Hebrew Society of Philadelphia is clearly documented.

Numerous historians and biographers of the founding father have denounced the so-called “speech.” Among them is J. Henry Smyth, Jr., compiler of The Amazing Benjamin Franklin, who labeled the canard a “libel of the Jewish race, unjust both to Jews and to the name and fame of Benjamin Franklin. I have investigated this calumny and find no historical basis.” (IsraelNationalNews.com)

by Tzvi Ben Gedalyahu The world soccer federation FIFA has banned the waving of “Free Shalit” flags at the World...