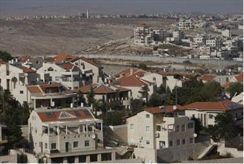 Jerusalem’s planning commission ended the de facto building freeze Monday night by approving building 32 new housing units in Pisgat Ze’ev, where 50,000 Jews lives in the northeastern part of the city. The Palestinian Authority claims the areas as part of its proposed new Arab country within Israel’s post-1967 borders. The approval puts a stamp of approval on Israel’s determination not to surrender to PA pressure, backed by U.S. President Barack Obama, to stop all construction for Jews in parts of Jerusalem where PA Chairman Mahmoud Abbas demands sovereignty. President Obama has labeled the Jewish neighborhoods as “settlements” although approximately 300,000 Jews live in the neighborhoods, which are part of the municipality.

Jerusalem’s new light railway system, now in the final stages of construction, runs through Pisgat Ze’ev and reinforces its being part of the city, for all intents and purposes. The United States has not yet reacted to the Jerusalem announcement, but a PA spokesman said it shows that Israel is not committed to the PA’s version of a new Arab country. The 32 residences are part of a 220-unit project, and the approval is one of the last steps in a long bureaucratic process, which “still has to go to 15-to-20 municipal departments for approval, like sanitation and environment,” Jerusalem spokesman Stephen Miller said. A previous crisis with the United States broke out earlier this year over a bureaucratic approval of a housing complex in the nearby Ramat Shlomo neighborhood but which still is approximately two years away from final authorization. On the eve of Prime Minister Binyamin Netanyahu’s trip to the White House last week, he beat back an effort by several Knesset Members to introduce a bill that would require legislative approval for a building freeze. Jerusalem’s planning committee also postponed a decision on the building at Pisgat Ze’ev to honor Prime Minister Netanyahu’s request not to stir up a controversy before his meeting with President Obama. (IsraelNationalNews.com)
In Case You Missed It:  Is Maricopa County Board of Supervisors Covering Up for Soros Connected Sheriff’s Emails As Much As for 2020 Election Activity?
Posted in Israel, Terrorism, Tyranny and tagged Financial, Freedom, Islam, Israel, Jihad, Netanyahu, Obama, Palestinians, Terrorism, White House.

by Hana Levi Julian Al Aqsa (Hamas-Gaza) TV is continuing its unabated televised anti-Semitic incitement with an interview that claims...