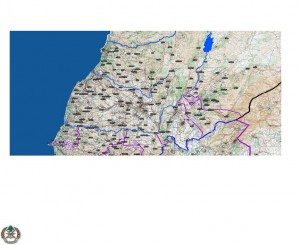 The following declassified intelligence maps as well as the 3D animated clip illustrate how Hezbollah, in the four years since the Second Lebanon War, has turned over 100 villages in South Lebanon into military bases. These maps and the 3D clip illustrate how Hezbollah stores their weapons near schools, hospitals, and residential buildings in the village of al-Khiam. They follow similar tactics in villages across southern Lebanon, essentially using the residents as human shields, in gross violation of UN Resolution 1701. al-Khiam was used as a rocket launching site during the Second Lebanon war.

During the Second Lebanon war, Hezbollah stored their weapons in open areas for the most part, which enabled the IDF to locate and destroy their stores. In the four years since then, Hezbollah has pursued a tactic of moving their weapons into civilian villages, essentially institutionalizing the tactic of using human shields on a large scale.

View this document on Scribd

In an incident on 12 October 2009, there was an explosion at a Hezbollah weapons storehouse in the village of Tayr Filsay. Aerial footage, taken shortly after the explosion, shows Hezbollah operatives closing down the area around the warehouse, driving in two trucks and removing weaponry from the site. They then took the weapons to a known weapons storage facility in the center of the village of Dir a-Nahar about four kilometers away. Only after Hezbollah removed the weaponry did they allow UNIFIL and the Lebanese Army to enter the site of the explosion.

In Case You Missed It:  Proof that the Taliban takeover was not Biden's incompetence But TREASON!
Posted in Israel, Terrorism and tagged Hezbollah, Islam, Israel, Jihad, Military, Missile Defense, Terrorism.