Analysis of the U.S.’ war on terror clearly demonstrates that we are not winning.

The reasons? If the war on terror were a medical condition, the reasons would be clear:

* Failure to treat the underlying cause of the problem
* The use of improper remedy
* Insufficient use of medication
* Failure to distinguish between the disease and its aggravating factors
* The presence of factor(s) impeding the action of the used treatment
* Relying on a medication to treat a new medical condition based solely on its former success in treating another disease. 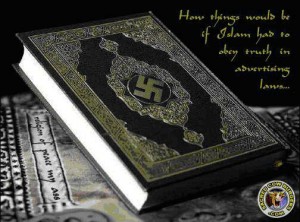 In the first case, failure to treat the underlying cause of the problem,
one of the basic rules in medicine is that failure of traditional therapies to treat a medical disorder must raise the possibility of an underlying condition that must be treated.

The same principle applies to radical Islam. Failure to acknowledge radical Islamist ideology as the main underlying case of the problem of terrorism has limited the U.S.’ ability to properly treat the condition.

We have been focused for nearly 10 years on treating the symptom of the problem (terrorist attacks) while the ideology of the Islamists (the underlying cause of the problem) was not treated.

With the use of improper remedy, it is not surprising that treatment will result in nothing but failure. Conventional military actions may not be the best remedy to deal with suicide bombers and Islamist insurgency.

The use of low dosages of antibiotics in a medical treatment, instead of full doses, will not only result in failure to treat an infection but may also result in the emergence of resistant strains.

Troop levels have been increased several times to overcome the enemy in both Iraq and Afghanistan, to little avail. Better estimation of the capabilities of the enemy and more accurate evaluation of military power is crucial for victory.

Had the U.S. used sufficient power from the beginning of this war, the situation would have been much different from now.

It is important to care for the contributing factors that aggravate a medical condition; however, without treating the condition itself the patient cannot be properly treated. The same principle applies to terrorism as political, social, and economical factors contribute, and thus must be treated.

Factors that impede the action of a given medication may seriously affect the ability of the medication to work effectively. The same principle can help us understand the failure of treating Islamic radicalism. Apologetic attitudes toward radical Islam can impede the active steps taken to defeat it.

Finding justifications for terrorism by claiming that it is caused by the Arab-Israeli conflict or that it is a reaction to U.S. foreign policy gives a green light and justification to the terrorists to continue their violent acts and impedes our efforts to treat the problem.

Relying on a medication to treat a new medical condition based solely on its former success in treating another disease is folly. The same applies to radical Islam. Novel tactics and new approaches are needed to deal with this new type of scourge.

America must focus on fighting the ideology that creates terrorism, adopt novel strategies to deal with the problem at different levels, and stop the apologetic attitudes toward Islamism.

We fail to do so at our own peril. If terrorists get their hands on more sophisticated types of weapons we will wish we had addressed the problem in a more strategic manner.

The following declassified intelligence maps as well as the 3D animated clip illustrate how Hezbollah, in the four years since...