In light of Ankara’s recent criticism of what it calls Israel’s “open-air jail” in Gaza, today’s date, which marks the anniversary of Turkey’s invasion of Cyprus, has special relevance. 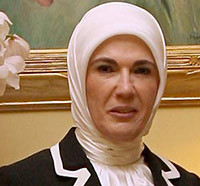 Turkish policy toward Israel, historically warm and only a decade ago approaching full alliance, has cooled since Islamists took power in Ankara in 2002. Their hostility became explicit in January 2009, during the Israel-Hamas war. Prime Minister Recep Tayyip Erdo?an grandly condemned Israeli policies as “perpetrating inhuman actions which would bring it to self-destruction” and even invoked God (“Allah will … punish those who transgress the rights of innocents”). His wife Emine Erdo?an hyperbolically condemned Israeli actions as so awful they “cannot be expressed in words.”

Their verbal assaults augured a further hostility that included insulting the Israeli president, helping sponsor the “Freedom Flotilla,” and recalling the Turkish ambassador.

This Turkish rage prompts a question: Is Israel in Gaza really worse than Turkey in Cyprus? A comparison finds this hardly to be so. Consider some contrasts: 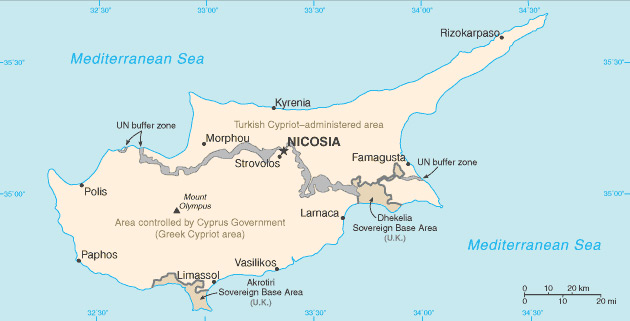 The division of Cyprus since 1974. 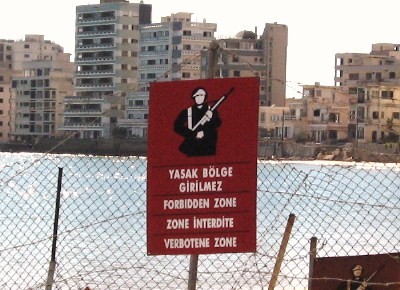 And then there is the ghost town of Famagusta, where Turkish actions parallel those of Syria under the thuggish Assads. After the Turkish air force bombed the Cypriot port city, Turkish forces moved in to seize it, thereby prompting the entire Greek population (fearing a massacre) to flee. Turkish troops immediately fenced off the central part of the town, called Varosha, and prohibited anyone from living there.As this crumbling Greek town is reclaimed by nature, it has become a bizarre time capsule from 1974. Steven Plaut of Haifa University visited and reports: “Nothing has changed. … It is said that the car distributorships in the ghost town even today are stocked with vintage 1974 models. For years after the rape of Famagusta, people told of seeing light bulbs still burning in the windows of the abandoned buildings.”

Curiously, another Levantine ghost town also dates from the summer of 1974. Just 24 days before the Turkish invasion of Cyprus, Israeli troops evacuated the border town of Quneitra, handing it over to the Syrian authorities. Hafez al-Assad chose, for political reasons too, not to let anyone live in it. Decades later, it too remains empty, a hostage to bellicosity. 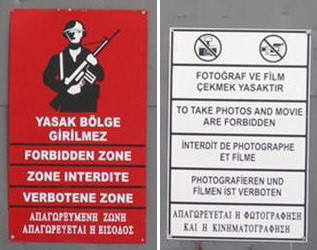 Signs on a metal gate in the capital city of Nicosia.

Erdo?an claims that Turkish troops are not occupying northern Cyprus but are there in “Turkey’s capacity as a guarantor power,” whatever that means. The outside world, however, is not fooled. If Elvis Costello recently pulled out of a concert in Tel Aviv to protest the “suffering of the innocent [Palestinians],” Jennifer Lopez canceled a concert in northern Cyprus to protest “human rights abuse” there.

In brief, Northern Cyprus shares features with Syria and resembles an “open-air jail” more than Gaza does. How rich that a hypocritical Ankara preens its moral plumage about Gaza even as it runs a zone significantly more offensive. Instead of meddling in Gaza, Turkish leaders should close the illegal and disruptive occupation that for decades has tragically divided Cyprus.

by Tzvi Ben Gedalyahu The IHH “charity," which attacked Israeli Navy commandos and which has been termed a terrorist group...