Opposition to the construction of mosques has skyrocketed in cities and towns across the country, scholars and advocates of Muslim culture tell The Upshot. 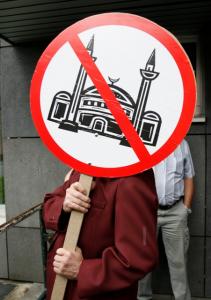 Public protests against three planned mosques have made news in the past week: Former Alaska Gov. Sarah Palin joined others in opposition to the building of a mosque a few blocks from the World Trade Center site. Hundreds demonstrated against a proposed mosque in a small town in Tennessee (pictured above). And the some residents of Temecula, California are opposing the local Muslim community’s plan to build a bigger mosque, saying it could become a hotbed of radical Islam.

Professor Akbar Ahmed, the Ibn Khaldun Chair of Islamic Studies at American University’s School of International Service, is not surprised by the recent spate of public protests. He spent last year traveling to more than 100 mosques in 75 U.S. cities with a team of researchers, and concluded that opposition to mosques, including some attacks on them, is on the rise and is spreading.

Ahmed said most Americans have little idea what goes on inside the approximately 2,000 mosques in the country, which leads to fear and anti-Muslim sentiment. Comments from public figures like Sarah Palin exacerbate the problem, he says.

Palin posted Sunday on Twitter that a planned mosque near the World Trade Center site would “stab hearts.” She joins a PAC and family members of some 9-11 victims in vocally objecting to the religious center. “Peace-seeking Muslims, pls understand, Ground Zero mosque is UNNECESSARY provocation; it stabs hearts. Pls reject it in interest of healing,” she wrote. (In addition to the mosque, the 13-story, $100 million project would include a swimming pool, gym, and performance space open to everyone, reports ABC News.)

“Sarah Palin’s comments again were saying implicitly that mosques are associated with violence and terrorism,” Ahmed said, though he added that he thinks the tension over this proposed mosque is unique due to the “raw wounds” of the 9-11 attacks. “At the highest level, even in America, we have a [former] vice presidential candidate, she can openly make a statement like this.”

Palin defended her statements in a post on Facebook, saying that she is all for religious freedom and tolerance, but that not building the mosque near Ground Zero is an issue of “common moral sense.”

Jim Zogby, the head of the Arab-American Institute, a non-profit research group, says there are not enough people in public life defending American Muslims’ right to worship.

“There is very little counter-thrust in the public debate and the result is I think Muslims are becoming increasingly concerned about their security in the country,” Zogby says. “This is a worrisome environment. Something’s got to give.”

Opponents of mosques feel freer now to openly object to the presence of a mosque in their community, says Ibrahim Hooper, spokesman for the Council on American-Islamic Relations, a Muslim advocacy organization.

“Mosques used to face opposition in the past, but it was usually couched in terms of opposition to parking or traffic,” Hooper said. “But you know it’s only recently I think that people feel comfortable expressing their bigotry so openly.”

Of course, opponents of mosques do not consider themselves bigots, and many are genuinely concerned that mosques may help produce home-grown terrorists. The Washington Post cited seven cases of home-grown terrorism that occurred over the past year alone, including the case of U.S. citizen Faisal Shahzad, who plead guilty to attempting to set off a car bomb in New York City’s Times Square. President Obama has named battling the phenomenon one of the country’s top security priorities.

Ahmed said the incidents of Americans turning to jihad is a reflection of a “failure in Muslim leadership.” He says Muslim religious leaders should have to be trained and certified, since they are in positions of power, often over young congregations. But he added that opposing mosques at home will only fuel accusations from America’s enemies that the country hates Islam and Muslims.

A pastor opposed to the proposed mosque in Temecula, California reflected these fears of homegrown terrorism in a comment to the LA Times.

“There is a concern with all the rumors you hear about sleeper cells and all that. Are we supposed to be complacent just because these people say it’s a religion of peace? Many others have said the same thing,” Pastor Bill Rench said.

Other opponents they their opposition is a matter of pragmatism. Stephen Schwartz, a convert to Islam and the founder of a non-profit group The Center for Islamic Pluralism, opposes the building of the mosque near the World Trade Center, calling it a “unnecessary and misguided attempt at conciliation.” He says that Muslims should not build big new mosques in the country because it will stoke tensions with the non-Muslim community.

“The problem that emerges is that these projects when they are ambitious and large right now this sets off a certain sector of the American people,” he said. “I think that’s very unfortunate but it is reality. Muslims should take that into account and should understand that building large mosques right now will be problematic.”

Some opponents of the mosque in Tennessee have told local news outlets they think people will learn jihad inside the mosque’s walls, though the local Muslim community has had a smaller mosque in the town for years without incident.

Several hundred people in Tennessee took to the streets of Murfreesboro last week to protest the local Islamic Center’s purchase of a 15-acre plot of land. They were met by a counter-protest of equal size.

A plan for a separate mosque was tabled in another town in Tennessee this year after public opposition, reports the Tennessean.

Ahmed visited the site of a mosque in Columbia, Tennessee that had been burned down and vandalized with painted swastikas in 2008, while researching last year.

“The local tiny Muslim community was in a state of shock because most of them were born in America and had lived very happily in the small community,” he said. “People say, ‘go back home’ and they say, ‘Where do we go? This is our home.'”

In Case You Missed It:  Boulder Shooter is ISIS Sympathizer, Living Leftists Manifestation of the Effects of Leftism
Posted in Terrorism and tagged Islam, Mosques, Muslims, Terrorism.

Turkey in Cyprus vs. Israel in Gaza

by Daniel Pipes The Washington Times July 20, 2010 In light of Ankara's recent criticism of what it calls Israel's...