A Virginia man charged with providing material support to terrorists abroad appeared in court today requesting an attorney be appointed to him. Zachary Chesser, 20, is accused of trying to join Al-Shabaab, a Somali-based Islamist militant group suspected in the recent bombing attacks in Uganda that left 73 dead and dozens more injured as they watched the World Cup final. 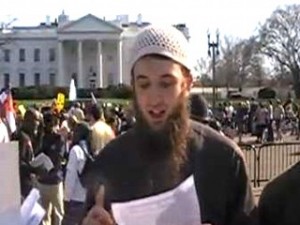 “I’m shocked—I’m just surprised,” said Yvette Deale, Chesser’s former neighbor. “It’s not the kind of thing I would have expected in this neighborhood.”

Chesser, who just two years ago was a high school football player and crew member in Fairfax, VA, is now one of 34 Americans accused of and charged with having ties to international terrorists in the past 18 months.

Sources say this trend represents an unprecedented spike in homegrown terror and is an emerging threat that has them deeply concerned. What they consider to be most alarming is the fact that many of those charged were radicalized on the Internet, with thousands of Americans reportedly frequenting terror websites that espouse mass murder.

“This Is What We Have Feared”

A recently disclosed FBI Directorate of Intelligence document from July 2009 estimated that there were as many as 15,000 websites and web forums that were supportive of terrorist activities. Yet, officials say the number of websites is constantly changing since many of the sites and forums are not maintained, with current estimates indicating as many as 10,000 active sites.

The FBI analysis noted that about 80 percent of those sites existed on U.S.-based computer servers. U.S. officials say these type of sites rapidly gained popularity when Abu Musab al-Zarqawi, the leader of Al Qaeda in Iraq, began to post beheading videos on the Internet in 2003.

“This is what we have feared for a very long time—that finally the ideology of radical Islam is effectively reaching into the United States to disaffected people here over the Internet,” said Richard Clarke, a former White House counterterrorism adviser.

Some suspects allegedly used the Internet to also contact radicals like cleric Anwar al-Awlaki. In 2009, Chesser reportedly told the FBI that he sent several e-mails to the New Mexico native, who in turn replied to a couple of them. Al-Awlaki, 39, has most recently been tied to Major Nidal Malik Hasan, the prime suspect in the Fort Hood massacre, as well as the failed Christmas Day bomber, Umar Farouk Abdulmutallab.

Some of those charged with terror are now well-known in this country, like Faisal Shahzad, the convicted would-be Time Square bomber. Just last week, a supposed martyrdom video surfaced in which an English-speaking Shahzad vocalized his appreciation for jihad, or holy war.

Also, David Headley from Chicago was convicted of helping to plan the November 2008 Mumbai attacks that killed more than 170 people. Then, associates of Najibullah Zazi, who is a permanent resident, were convicted of plotting to detonate bombs in New York City subways. And Michigan’s own Colleen LaRose, more commonly known as Jihad Jane, was implicated in a plot to kill a Swedish cartoonist for drawing the head of the Prophet Muhammad on the body of a dog in 2007.

Interestingly enough, Zachary Chesser has his own connection to animators. In April, Chesser, using the identity of Abu Talhah Al-Amerikee, threatened the creators of Comedy Central’s hit show “South Park,” after they depicted the Prophet Mohammed in a bear suit.

Posting on the website Revolutionmuslim.com, he wrote, “what they are doing is stupid, and they will probably wind up like Theo van Gogh for airing this show. This is not a threat, but a warning of reality of what will likely happen to them.” Van Gogh was a Dutch filmmaker who was killed in 2004 after making a film about women living in Islamic countries.

But there have been some suspected terrorists that have flown under the radar, like Bryant Vinas, who was accused of attacking a U.S. military base in Afghanistan and providing al-Qaeda with details about New York’s railway system. Also, Michael Finton was arrested in a sting where he was attempting to detonate a truck bomb at a federal courthouse in Springfield, Illinois.

With so many potential threats, authorities say they are in a race against time to find these radicals before they launch a successful attack on the land they grew up on.

“In the last six to nine months,” Clark said, “the FBI has seen more domestic Islamist extremist activity than at any time since immediately right after 9/11.”