Remember all that discussion about the Congress not reading the entire healthcare bill? Well here are a few details that they aren’t bragging about.

Under the new health care bill – did you know that all real estate transactions are now subject to a 3.8% Sales Tax? The bulk of these new taxes don’t kick in until 2013 (presumably after Obama’s re-election).

You can thank Nancy, Harry and Barack and your local Democrat Congressman for this one. If you sell your $400,000 home, there will be a $15,200 tax. This will effect everyone that sells a home, not only those making over $250,000 as the Obama administration promised.

This bill is set to screw the retiring generation who often downsize their homes. Is this “Hope & Change” great or what?

We can vote the bums out in November and demand that they eliminate the bill or at the very least defund it. Then in 2012 repeal it. 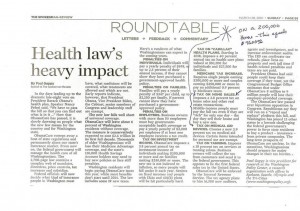 In Case You Missed It:  Twitter Founder Jack Dorsey Accuses CNN of Creating Conflict During Ferguson Riots — Forgets That He Protested There for Several Days Promoting the Big Lie
Posted in Financial, Tyranny and tagged Healthcare, Obama.

A former CIA director says military action against Iran now seems more likely because no matter what the U.S. does...