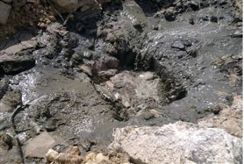 Pollution from Palestinian Authority towns is ruining natural areas in the Binyamin region, and the Israeli government allows the situation to continue, members of the Binyamin Regional Council accused Monday. PA pollution is an issue even in areas under full Israeli control (Area C), they said.

They named one area in particular that suffers from pollution: Wadi Kelt, a valley that runs from Judea to the Dead Sea, and specifically between Kfar Adumim and Jericho.

Residents of the PA town of Anata near Jerusalem dump their trash in a pond that is known to be filled with sewage, council members explained. When too much garbage is thrown into the pond, it overflows, leading the sewage to flow into nearby natural streams, among them Wadi Kelt.

The PA apparently does nothing to enforce proper disposal of trash in the area, according to their testimony. They called on Israeli authorities to get involved in order to prevent serious damage to the Jerusalem aquifer.

The council’s complaint came shortly on the heels of a similar warning regarding pollution in the Jordan River, specifically in Qasr al-Yahud, a site considered holy to Christians. The environmentalist group Friends of the Earth called to halt baptisms at the site due to raw sewage leaking into the water near the PA-controlled city of Jericho, which has caused high levels of harmful bacteria in the water. (IsraelNationalNews.com)

By Sheda Vasseghi The barbaric regime of the Islamic Republic of Iran recently amputated hands of several convicted thieves in...