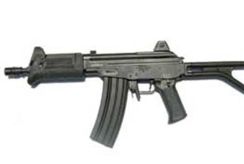 An American television program pits the Navy SEALs against Israeli commandos this week in the season finale of Spike TV‘s “Deadliest Warrior.”

The program, now ending its second season, features warriors from two different sides, faced off against each other in various scenarios. “We thought it would be a great finale because both are so iconic,” said executive producer Gary Tarpinian. “They are among the greatest soldiers in the world.”

Tarpinian would not give away the ending, but said, “this was maybe the closest battle we’ve ever had.”

Real-life representatives from the sides come on the program to demonstrate weaponry and tactics, and the winner is decided by using a computer calculation. Action sequences are filmed with actors, not with live ammunition or real-time personnel.

Moti Horenstein, a “krav maga” [hand-to-hand combat] expert who served as an Israeli commando in the 1980s, appears on the program and said he is willing to bet Israeli forces would win in a battle against anyone, “because we have no choice. We deal with violence 24/7.” Horenstein owns a chain of krav maga schools in New York and Florida.

His counterpart, 36-year-old Chris Osman of San Diego, served in Afghanistan as a Navy SEAL and is the co-author of “SEALs: The U.S. Navy’s Elite Fighting Force.” Osman is convinced the SEALs would win, because they “have better training, [they’re] better equipped and [they] have more combat experience. And the selection process is unbelievably tough.”

Barak Made for a ‘Striking Woman’

Trauma expert Dr. Armand Dorian, one of three commentators on the program, expressed the opinion that the SEALs would have a strong advantage over the Israelis in one major area – their training regarding the use of force vis-a-vis civilians.

“For the Israeli commando, collateral damage is not acceptable because of the fact that they fight inside their own homeland,” Dorian said in an interview. “For example, a Navy SEAL will put 30 slugs in the chest and if 10 go around the body, so be it. They just want to make sure of the kill.

“The Israeli commando will put only five shots in, due to the fact that he only has an opening of a few seconds and he knows that if he does miss, he may end up killing an innocent bystander. From a medical perspective, that’s huge because in a trauma room, we’re taking care of a lot of collateral damage of innocent bystanders.

Tarpinian noted that Israeli commando units are able to trick their enemies, sometimes by using disguises – and mentioned that Defense Minister Ehud Barak once dressed as a woman in a secret operation.

Barak, he said he was told, made for a “striking woman.”

Tarpinian added that a number of those who served in Israeli commando units had refused to appear on the program, saying they had taken a vow to keep their training secret.

Producers offered a brief description on the program’s web site of some of the weapons the American and Israeli warriors would be bringing with them into battle.

For the Americans, it will be C-4 plastic explosives, highly malleable, relatively safe to handle and very convenient. “Packs a pretty big punch,” according to the web site.

But the Israelis will be packing Semtex, a pliable, odorless plastic explosive that is “safe to handle and can only be ignited by a detonator… difficult to detect, which makes it extremely desirable.” Apparently the explosive is also “twice as powerful as TNT” and is “virtually invisible to conventional security devices.” Libyan terrorists used half a pound to a pound of Semtex in 1988 to bring down Pan Am Flight 103 over Lockerbie, Scotland. Not one of the 270 people aboard survived the crash.

The program’s statement noted that the main difference between the way explosives are used by Israeli commandos, as opposed to others, is in how the attack is delivered:

“Instead of destroying an entire block by fitting a cell phone with a planted explosive, it is target-focused,” we are told. “It kills only the target they want dead, with minimum loss to surrounding civilians. It also sends a very clear and powerful psychological message to other terrorists.”

Note: Although the program is scheduled to air July 27 on the Spike TV network, it is posted and available to viewers on the Internet only within the United States and Canada.
(IsraelNationalNews.com)

by Maayana Miskin Pollution from Palestinian Authority towns is ruining natural areas in the Binyamin region, and the Israeli government...