The barbaric regime of the Islamic Republic of Iran recently amputated hands of several convicted thieves in the city of Hamedan or ancient Ecbatana, one of the capitals of the Achaemenid Persian Empire (550-330 BC) whose founder Cyrus the Great declared the world’s first known Bill of Human Rights. Ms. Sakineh Mohammadie Ashtiani was forced to confess an alleged adultery after enduring 99 lashes. As countless Iranian women before her, she awaits an execution by stoning pending a global uproar against the regime’s barbaric behavior. 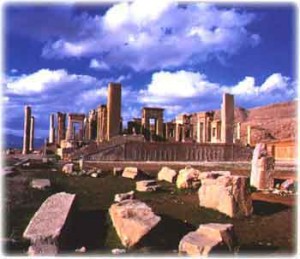 The efforts of the clerics in Tehran to destroy Iranians as a people is not the beginning of the Iranian genocide, but the continuation of the policy of the Muslim invasion of 7th century which spread by making Iranians the subject of grand scale destruction. Sharia Laws provide any and all violent means to accomplish this goal.

Iranian philosophy based on freedom of choice and equality cannot naturally co-exist with a system based on intolerance and prejudice towards women and people of different faiths. Simple conversion to Islam is also not sufficient given Islam ignores pre-Islamic history and culture, and does not recognize national identities. Iranians were aware of their national identity at least as early as 1500 BC prior to their migration from Central Asia to what is now known as Iran.

The past 31 years of gross violation of human rights, amputations, hangings, child executions, prison rapes, punishments by stoning, assassinations of nationalists and opposition leaders, and the like are only the continuation of what Iranian people have endured in their own country at the hands of these foreign invaders. The defeat at the battle of Qadisiyyah in 636 is considered the beginning of the Iranian plight. The victory of an Islamic Revolution in 1979 is labeled by many Iranians as Qadisiyyah II.

With their systematic conquest of the affluent Sasanian Persian Empire (224-651), the Muslims burned Iranian palaces, thousands of libraries, and priceless archives. Muslims called Iranians “ajam” or mute and “najis” or impure. Thousands of Iranians were slaughtered, raped, and forced into slavery. Immediately after the conquest of Iran, Muslims gave the status of “dhimmi” or rights of residence in return for special taxes to the majority of Iranians, who were Zoroastrians. Under this status, Iranians were subjected to frivolous persecution, discrimination, forcible conversion, and harassment. Thousands of Iranian priests were executed and hundreds of Zoroastrian temples across Iran were either destroyed or converted to mosques.

The Iranian genocide has been an ongoing project for centuries. Besides violent attacks against their culture, history, national memories, arts and sciences, wealth, standard of living, and natural human rights, Iranians were also on the verge of losing their language which was revived by a national poet-hero Ferdowsi (940-1020).

About 200 years ago, because of an incompetent government and excessive meddling of the clerics in the country’s affairs, Iranians lost approximately 1.35 million square miles of territories via forced treaties.

Unfortunately, history was repeated when in 1979 the mullahs took control. Their meddling led to a bloody war with Iraq in the 1980’s resulting in hundreds of thousands of deaths and mutilations and destruction of cities. Because of the clerics, Iranians are once again facing destructive and detrimental separatist movements in Sistan-Baluchestan and Khuzistan which would result in loss of additional territories. Because of the clerics, Iranians face potential military strikes by those nations threatened by the theocracy in Tehran which could result in more territorial losses.

Over 3 million brave men and women of Iran have poured into the streets since June 2009 against the anti-Iranian occupiers in Tehran. Iranian nationalists living abroad continue to support their efforts by holding demonstrations and using technology to show the regime’s atrocities to foreign nations. Despite epic rise of terrorism across western countries, the U.S. and the Free World continue to play around with the Islamist regime assuming that short-term benefits received via sanctions and black market are worth the long-term damages in the near future.

The longterm prospects for mullahcracy are not good. As Samuel Johnson (1709-1784) put it: “No government power can be abused long. Mankind will not bear it. There is a remedy in human nature against tyranny, that will keep us safe under every form of government.”

And let us not forget the words of Thomas Jefferson: “In every country and every age, the priest had been hostile to Liberty.”

Iranians will not cease their centuries of struggle against inhumanity. The day will come when a free, secular, and democratic Iran under a nationalist leadership will once again protect its people’s rights and security. The Iranian genocide organizers and supporters will be hunted down one by one. It is time for the Free World to practice what it preaches and support the Iranian opposition against tyranny. Regime change is a must! It would be good for Iran, the Middle East, and world peace. The West should stop engagements with pro-Sharia Law “reformists” and provide media communication venues badly needed by the pro-democracy nationalists so they can guide and educate Iranians during their national uprising. A secular, democratic Iran will end Iranian genocide, and foster healthy, prosperous relations with other freedom loving nations. Time is of the essence!

All Real Estate Transactions are now subject to a 3.8% Sales tax!

Remember all that discussion about the Congress not reading the entire healthcare bill? Well here are a few details that...