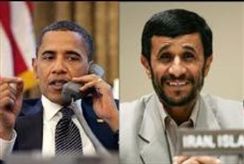 Iranian President Mahmoud Ahmadinejad has challenged U.S. President Barack Obama to a public and “man-to-man” debate when the Islamic Republic leader visits the United Nations next month for the next session of the General Assembly. President Obama is unlikely to accept the offer.

In a live state television address to expatriate Iranians, he stated, “We are hopefully coming for the UN assembly. We are ready to sit down with Mr. Obama face-to-face and put the global issues on the table, man-to-man, freely, and in front of the media and see whose solutions are better. We think this is a better approach.”

You support a country which has hundreds of atom bombs, and you say ‘we have to stop Iran,’ which you say can one day have a bomb. You are disgracing yourselves in the world.”

The offer of a debate follows by several weeks the Iranian’s president’s suggestion that the United States accept Iranian help to stop the giant oil spill on the Gulf of Mexico. The U.S. government made no comment on the offer.

Ahmadinejad has blamed the United States for “global disorders,” particularly the recent financial crisis that threw the entire world into panic and ushered in an almost-worldwide recession.

Despite Ahmadinejad’s criticism of the U.S. government, President Obama previously has tried to “engage” Ahmadinejad in diplomatic talks over the Islamic Republic’s unsupervised construction of nuclear power.

Ahmadinejad said in his speech, “The U.S.  government recently said it was ready for a high level dialogue. Fine, we are ready to have high level talk based on mutual respect and dignity. But if you think you can brandish a stick so that we accept all that you say, that will not happen.”

Following the lack of diplomatic progress with Iran, the United States last month convinced the United Nations Security Council to slap a new round of sanctions on the country and then stiffened its own punitive measures to restrict investments and activity in Iran’s energy sector.