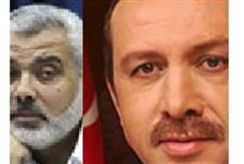 Turkey had been considered a close friend of Israel the last two decades until last year’s Operation Cast Lead war, which served as a catalyst for Ankara to reject Israel in favor of the Iranian-Syrian-Hamas axis. Erdogan has called the Iranians “our friends, our brothers.”

The new alliance has left Israel with a solid front of enemy states north of the border with Lebanon.

Erdogan recently heaped praise n Hamas, saying it is not a terrorist organization and condemning Israel for the flotilla clash with Turkish terror activists. Turkey has demanded that Israel apologize for the battle and give compensation for the deaths of nine terror-trained Turkish citizens who were among the dozens who attacked Navy commandos trying to divert the flotilla from Gaza.

The honor bestowed on him by Haniyeh is at least the second time a baby in Gaza has been named after Erdogan. Shortly after the flotilla clash, the same name was given to a boy because of the parent’s admiration of Erdogan for recognizing the Hamas de facto government.

US: We Have an Iran Strike Plan

by Elad Benari The US military announced on Sunday that it has a plan in place to strike Iran should...