The website’s message, translated by Middle East Media Research Institute (MEMRI), was posted Monday by someone calling himself  “Sama Baghdad,” who described himself as “a student at the Al-Fallujah Islamic University,” meaning a member on the website’s Islamic jurisprudence forum.

The message was headed “Retaliation and Revenge for the Killing of the Two Sheikhs – Part One,” and a link to the animated clip was presented as the first of a series and dedicated to “Crusader infidels.”

The author explained that the clip urges the Muslims to avenge the killing of the two martyrs – ‘Omar Al-Baghdadi, Emir of the Islamic State of Iraq (ISI) and its “war minister” Abu Hamza Al-Muhajir, who were killed in a joint U.S.-Iraqi strike in April.

In a response to members of the website’s forums, “Baghdad” write that the “images will gladden your heart.” 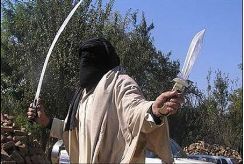 Warning: Some readers may find the graphic material offensive or unsuitable for children.