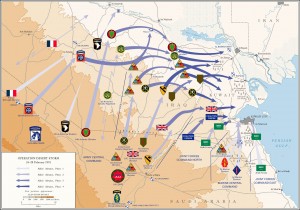 It was twenty years ago on this day, that Saddam Hussein invaded Kuwait, initiating a crisis that lasted half a year and beginning the slow turn of events that led eventually to his own overthrow and execution, followed by the American-led occupation.

While immensely important in the history of Iraq, the real surprise lies in the transitory nature of the invasion and the war it spawned. Here’s how I put it on the tenth anniversary, in an article titled “After ‘Desert Storm,’ Barely a Footprint Was Left in the Sand” and published in August 2000:

Nearly everyone at the time [in 1990] agreed that the Gulf War was a huge event, perhaps an epochal turning point. [George H.W.] Bush spoke about it leading to the start of a “new world order” in which coalitions would come together to prevent Iraqi-style use of force. Pundits expected that the war assured Bush four more years of the presidency just as it meant that Hussein would soon be gone, perhaps followed by the breakup of Iraq. Analysts predicted that a new, American-oriented era had begun in the Middle East, with more democracy, human rights and economic competitiveness. … In retrospect, one can only marvel at how little of this came about.

That the invasion is now quite neglected on its anniversary points further to its relatively small role in our consciousness and our lives. That in turn points to the fact that seemingly huge events sometimes are not, while the real turning points are hardly apparent at the time. (August 2, 2010)

Tell the CA Assembly to vote NO on SB 930!  Tomorrow, the California State Assembly's Appropriations Committee will hold a...