White House made lots of claims about stimulus, including up to 3.6 million private-sector jobs. So far, they are 5.3 million jobs short. 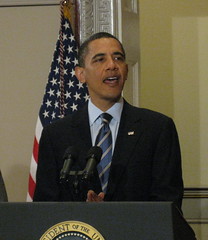 On Aug. 6, everyone’s attention will be fixed on the release of July’s unemployment numbers. The national unemployment rate is forecast to increase to 9.6 percent, according to Bloomberg News’ survey.

The White House tried to get ahead of the potentially negative news with its own spin for reporters and the public by having the treasury secretary on ABC and in The New York Times. If history repeats, the networks will peddle this spin rather than criticize the administration.

In an ABC interview Aug. 1, Treasury Secretary Timothy Geithner said “it is possible you’re going to have a couple of months when it [unemployment rate] goes up.” But, according to Geithner, the recovery is still under way.

Geithner wrote an op-ed, “Welcome to the Recovery,” in the Aug. 3 New York Times defending Obama’s “economic rescue package” saying it was “essential to turning the economy around.”

The news media supported the view that the rescue was necessary from the very beginning. On the one-year anniversary of the stimulus, ABC, CBS and NBC all corroborated White House claims about how it “saved or created” many jobs and prevent economic disaster.

In jobs stories too, the White House spin was evident. Elaine Quijano’s brief about jobs on the April 3, 2010 “Early Show” only offered the perspective of the White House. Not a word about the administration’s many critics.

Quijano said, “President Obama is pointing to the biggest job increase in three years as a sign America is beginning to turn the economic corner. A new report from the Labor Department says businesses added one hundred sixty-two thousand jobs last month – that was the largest gain in three years. Though, the unemployment rate remains at 9.7 percent.” Another jobs story later that morning by Anthony Mason was even more positive, including three optimistic voices and no criticism.

Many in the news media have peddled Obama’s administration spin, rather than calling attention to the president’s numerous broken economic promises. The administration made a number of extravagant promises that included claims the unemployment rate would not rise above 8 percent with the stimulus package and that Obama’s plan would “likely save or create 3 to 4 million jobs.” Obama also promised more than 4 million jobs would be created by the end of 2010.

Even before he was president, on Jan. 10, 2009, Obama made his claim that 3 to 4 million jobs would be saved or created by his economic policies. The bulk of those jobs were supposed to come from the private sector.

“Ninety percent of these jobs will be created in the private sector,” Obama continued. “The remaining 10 percent are mainly public sector jobs we save, like the teachers, police officers, firefighters, and others who provide vital services in our communities.”

That specific promise was mentioned on NBC’s “Today” and CBS’s “The Early Show” in February 2009. After Obama made that promise, the private sector lost more than 3.2 million jobs (3,261,000 to be exact). But according to a Nexis search, only one broadcast network story included any criticism of the claim. Economist Peter Morici called it a “wish,” that wouldn’t come true in an interview on the March 10, 2009, “Early Show.”

The president pledged to create 2.7 million to 3.6 million private sector jobs and instead the country lost almost that many jobs. The economy has only begun to add private jobs again starting in January 2010, and to date 593,000 jobs have been gained. But that still puts the Obama administration in the hole by more than 2.6 million jobs, – and 5.3 million away from his lower claim.

It turned out Morici was right, but the networks didn’t bother to report the administration’s failure. Instead the broadcast networks continue to ignore the difference between reality and Obama’s grandiose claims. Rather than pointing the finger at the president’s policies, the media continue to protect the administration from criticism.

Even in downbeat reports after the June unemployment data was released, broadcast journalists went easy on Obama. NBC’s Savannah Guthrie portrayed criticism as a partisan tactic, rather than rooted in fact on July 3.

“Republican critics said the administration had overpromised on the stimulus, which hasn’t sufficiently delivered on jobs. The administration says there are bright spots: corporate profits are up, the economy is growing, and the private sector has added jobs six months in a row,” Guthrie said.

On CBS “Evening News” the same night, Whit Johnson consulted liberal economist Dean Baker, who argued that the “private sector’s not gonna do it [spend money to get economy going],” rather “the government’s got to.” Conservatives argue that Obama’s policies are keeping the unemployment rate so high, not an inability of the private sector to create jobs.

According to The Heritage Foundation, the stimulus failed because of “poorly targeted tax cuts and ineffectual spending increases.” But it “was doomed from the outset because it was based on the erroneous assumption that deficit spending can increase total demand in a slack economy,” Heritage explained.

They also warned that businesses are “holding back,” from investing and hiring because of worries about the economy or “threatening policies from Washington” including tax hikes on the horizon.

No Criticism for Obama, Despite Attacks on Bush and Reagan

Earlier in 2010, network reporters were optimistic that the job market had really “turned the corner.”

On April 2, ABC’s Bianna Golodryga declared that “the jobs are coming back.” She added that “after two years of job losses, March proved to be a turning point. Golodryga is engaged to Obama’s former budget director Peter Orszag.

The next month, NBC’s Guthrie declared that “hope was making a comeback” at a Virginia jobs fair. That was the day the Bureau of Labor Statistics (BLS) reported that 313,000 jobs had been created in April: 241,000 in private industry.

But their optimism was short-lived. May data released by the BLS showed private hiring lagged at 33,000, far behind the total job gains of 433,000.

They reacted with appropriate concern, but still avoided blaming White House economic policies. CBS’s Anthony Mason described the economic recovery as “sputtering,” on July 2 and Golodryga said that “The great recession is technically over” even though not everyone is feeling it.

But what was missing from even the pessimistic jobs reports was the characteristic blame for those in power. Under Republican presidents George W. Bush and Ronald Reagan, the news media found the dark side of job gains (in the case of Bush), or showed a world of desperate jobless individuals (Reagan).

In 2005, more than 2 million new jobs were created under Bush. But that didn’t stop the three broadcast networks from downplaying strong growth and emphasizing negatives like corporate layoffs and outsourcing. Hit Job, a Special Report from the Business & Media Institute, found that the networks focused on job losses in more than half the reports despite a 4.7 percent unemployment rate.

In 1982, Reagan faced high unemployment, similar to Obama’s unemployment rates in 2009. But the networks were 13 times more negative under Reagan than Obama. Food lines, suicide and battering, as well as an emphasis on the “new poor,” shaped unemployment stories in 1982. But in 2009 and 2010, the networks were constantly pointing out the silver lining in bad economic news.

Promises, promises. Obama and his advisers made many claims about what the massive spending package would accomplish. But in each case, the administration’s failure has been mostly ignored by the news media.

Network journalists refused to hold him responsible for the 10 percent unemployment rate in January 2010, despite being in office for an entire year. With the exception of Sunday talk shows, the network news reports remained uncritical despite a year with the most jobs lost since 1940.

The media have also ignored the failure of the stimulus package to halt rising unemployment. The administration claimed it would prevent the rate from going above 8 percent. In January 2009 the rate was 7.2 percent. By April 2009, it had soared to 8.9 percent – nearly a percentage point higher than Obama’s promise.

Rather than report these failed job numbers, the media have found the “silver lining” in the unemployment story.

On June 1, The Washington Post spun the projected loss of a half million jobs, saying, “Economists forecast that employers will have shed another 530,000 jobs and that the jobless rate will rise to 9.2 percent [in May], from 8.9 percent. Although those numbers are steep, they would provide ammunition for the glimmers-of-hope crowd.”

According to Heritage, Obama is facing a 7.3 million jobs deficit – gap between his promise of 3.5 million jobs and the June 2010 employment figures. That gap widens if you use Obama’s bigger promise of 4.1 million jobs by the end of 2010. Either way, the president is far from meeting his own expectations for U.S. job growth and it is time the news media started calling him out on it.

In Case You Missed It:  Giddy Reporter Sucks Up to Joe Biden: “How Was Breakfast, Mr. President? Do You Like Coming to Wilmington?” (VIDEO)
Posted in Financial, Tyranny and tagged Economy, Financial, George W Bush, Liberalism, Obama, Recession, Ronald Reagan, Stimulus.